Six Sigma Kmart and Casey Anthony: Correlation is not Causation

Continuing our investigation into Crazy Correlations, today we look at a case that completely validates the mantra that correlation is definitely not causation; put another way, just because there appears to be a relationship between one event and another event, it doesn’t necessarily mean that they are related. Today we look at Kmart Jobs and Casey Anthony.

Who is Casey Anthony?

In all honesty, I am very clueless as to current media hype events. But, apparently, Casey Anthony is a person who allegedly killed her daughter. In the United States, this has been a big deal with news of the murder trial all over the television. Last week, I guess, Casey Anthony was found Not Guilty by the Jury and the court released from Jail. Anyway, that’s all I care to know. Moving on. Not quite yet. Writing this post was a bit painful because I truly don’t care who Casey Anthony is or the media circus surrounding her murder trial. But, her case does serve to illustrate something interesting about regression analysis. Anyways, I’ll suffer through the embarrassment in order to illustrate something about the regression model. What is really interesting is the relationship between the phrase “Casey Anthony” and “Kmart Jobs”: 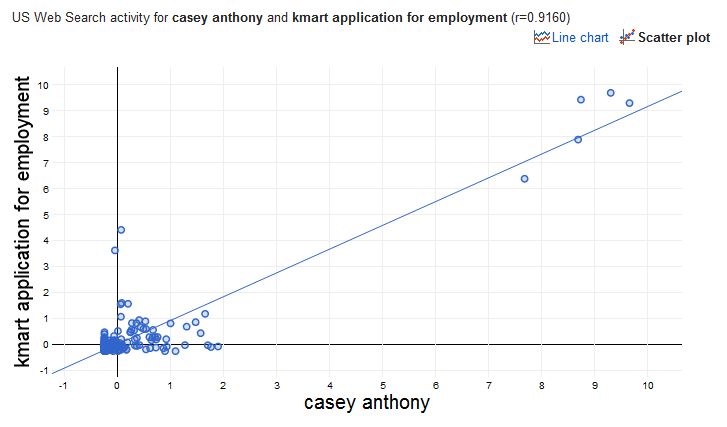 The correlation coefficient or, R^2,  shows 0.9160 which means that almost all of the variation can be explained by the regression model. In other words, without any other context involved, there’s definitely a strong relationship between Casey Anthony and Kmart Jobs. But is this true? In all honesty, I don’t care and you probably don’t either. Here’s the point: just because there appears to be a strong relationship between one variable to another, that doesn’t really mean there are necessarily related. Unless of course Casey Anthony will be working at Kmart now that she’s out of jail. Previous Correlation exercises: