Some of you are familiar with Clayton Christensen. He’s a Harvard Business School professor and is well known for his research on disruptive innovation. He recently published a new book called The Innovator’s DNA and in that book he quotes me.

The book argues that there are five discovery skills that seperates ordinary managers from exceptional innovative leaders. Those five skills are:

Go check out the book – I hear it’s good. 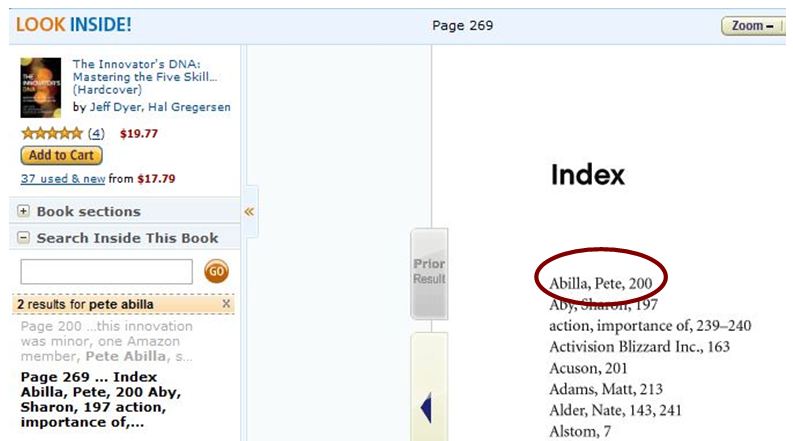 Here’s a little information about his new book:

Are you the next Steve Jobs?

You could be as innovative and impactful”if you can change your behaviors to improve your creative impact.

In The Innovator’s DNA, authors Jeffrey Dyer, Hal Gregersen, and bestselling author Clayton Christensen (The Innovator’s Dilemma, The Innovator’s Solution) build on what we know about disruptive innovation to show how individuals can develop the skills necessary to move progressively from idea to impact.

By identifying behaviors of the world’s best innovators”from leaders at Amazon and Apple to those at Google, Skype, and Virgin Group”the authors outline five discovery skills that distinguish innovative entrepreneurs and executives from ordinary managers: Associating, Questioning, Observing, Networking, and Experimenting.

Once you master these competencies (the authors provide a self assessment for rating your own innovator’s DNA), the authors explain how you can generate ideas, collaborate with colleagues to implement them, and build innovation skills throughout your organization to sharpen its competitive edge. That innovation advantage can translate into a premium in your company’s stock price”an innovation premium”which is possible only by building the code for innovation right into your organization’s people, processes, and guiding philosophies.

Practical and provocative, The Innovator’s DNA is an essential resource for individuals and teams who want to strengthen their innovative prowess.

Here is some information about Clayton Christensen:

Clayton M. Christensen is the architect of and the world’s foremost authority on disruptive innovation, a framework which describes the process by which a product or service takes root initially in simple applications at the bottom of a market and then relentlessly moves up market’, eventually displacing established competitors. Consistently acknowledged in rankings and surveys as one of the world’s leading thinkers on innovation, Christensen is widely sought after as a speaker, advisor and board member. His research has been applied to national economies, start-up and Fortune 50 companies, as well as to early and late stage investing.

His seminal book The Innovator’s Dilemma (1997), which first outlined his disruptive innovation frameworks, received the Global Business Book Award for the Best Business Book of the Year in 1997, was a New York Times bestseller, has been translated into over 10 languages, and is sold in over 25 countries. He is also a four-time recipient of the McKinsey Award for the Harvard Business Reviews’s best article and received a Lifetime Achievement Award from the Tribeca Film Festival in 2010.

Christensen has recently focused his innovation lens on two of our most vexing social issues, education and health care. Disrupting Class which looks at the root causes of why schools struggle and offers solutions was named one of the 10 Best Innovation and Design Books in 2008 by BusinessWeek and the best Human Capital book of the year in the Strategy + Business Best Books of 2008. The Innovator’s Prescription (2009) examines how to fix the problems facing healthcare. So as to further examine and apply his frameworks to the social sector, Christensen founded Innosight Institute, a non-profit think tank, in 2008.

An advisor to numerous countries and companies, including the government of Singapore, he is currently a board member at India’s Tata Consultancy Services (NYSE: TCS), Franklin Covey (NYSE: FC), W.R. Hambrecht, and Vanu. Christensen also applies his frameworks via management consultancy Innosight which he co-founded in 2000, and Rose Park Advisors, an investment firm he founded in 2007.

Christensen was born in Salt Lake City, Utah in 1952. He graduated with highest honors in economics from Brigham Young University in 1975. Later, he received an M.Phil. in applied econometrics and the economics of less-developed countries from Oxford University in 1977, where he studied as a Rhodes Scholar. He received an MBA with High Distinction from the Harvard Business School in 1979, graduating as a George F. Baker Scholar. In 1982-1983 he was a White House fellow, serving as an assistant to U.S. Transportation Secretaries Drew Lewis and Elizabeth Dole. In 1992, he was awarded a DBA from the Harvard Business School, receiving the Best Dissertation Award from the Institute of Management Sciences for his doctoral thesis on technology development in the disk drive industry. He is currently the Robert and Jane Cizik Professor of Business Administration at the Harvard Business School.

Professor Christensen is committed to both community and church. In addition to his stint as a White House Fellow, he was an elected member of the Belmont Town Council for 8 years, and has served the Boy Scouts of America for 25 years as a scoutmaster, cub master, den leader and troop and pack committee chairman. He also worked as a missionary for the Church of Jesus Christ of Latter-day Saints in the Republic of Korea from 1971 to 1973, speaks fluent Korean, and is currently a leader in his church. He and his wife Christine live in Belmont, MA. They are the parents of five children, and have three grandchildren.