Continuing our series on the leaders that have made a significant impact to the quality movement, lean manufacturing, and six sigma, we’ve featured Sakichi Toyoda, Walter Shewhart, and Armand Feigenbaum, and today we feature Genichi Taguchi. Genichi Taguchi contribution are many. This article just highlights a few.

Perhaps Taguchi is best known for his influence on modern day website optimization, better known as A/B Testing or Multivariate Testing, which we’ll discuss shortly. Overall, his application of statistics for business specific problems is his greatest contribution with broad influence.

Genichi Taguchi stressed quality right from the design stage and not just as an inspection. In short, he believed quality was related to process design. Dr Genichi Taguchi was born in 1924 in Japan. Initially, he served the Astronomical Department of the Navigation Institute of the Imperial Japanese Navy during the Second World War. Later, he joined the Ministry of Public Health and Welfare and the Institute of Statistical Mathematics. It was here that he worked with the eminent Japanese statistician Matosaburo Masuyama and gained vital insights into statistical analysis.

His expertise in statistics garnered him an opportunity to work with reputed pharmaceutical company Morinaga Seika and its sister company, Morinaga Pharmaceuticals. Taguchi then joined the Nippon Telegraph Electrical Communications Laboratory. Here, he was entrusted with the task of enhancing the productivity of the Research and Development (R & D) department. To achieve this objective, Taguchi trained the engineers to improve productivity through effective and simple techniques. Initially, Taguchi visited many Japanese companies to study different operating procedures. He would later educate the engineers on what he had learned. Eventually, he developed his own techniques, and his visits to companies helped him propagate his techniques. He stayed at the Nippon Telegraph Electrical Communications Laboratory for over 12 years

Soon, Japanese companies like Toyota adopted Taguchi’s techniques because they foresaw its great advantages. In 1951, he published a book that introduced the concept of orthogonal arrays. In his quest for a methodology for high quality, he met two legendary statisticians at the Indian Statistical Institute – R. A. Fisher and Walter A. Shewhart. After his interactions with them, he published a book on Design of Experiments in 1957.

In 1970, Taguchi devised a new concept in quality called the Quality Loss Function. He published two more books this year, along with the third edition of Design of Experiments.

Unlike the western definition of quality, Taguchi defined quality loss, as loss imparted by the product to society from the time the product is shipped. The loss factor encompasses two losses:

Taguchi Loss Function was developed on the premise that the greater the variation of a value from the standard, the greater the costs incurred. Taguchi Loss Function suggests that organizations must settle for options that cost the least. Organizations should thus make decisions after conducting a cost analysis and understanding all implications. It also
suggests that the lowest cost decision is not always the best one for the organization. This decision depends on organizational priorities 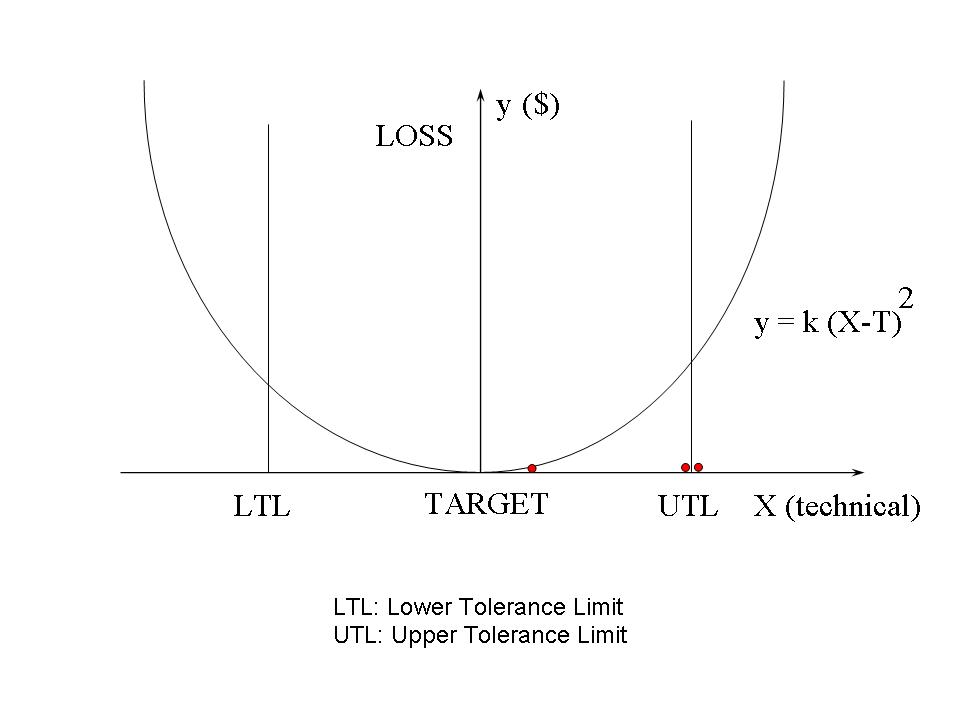 Take a simple example of a tire manufacturer. This firm produces tires and a key component of high quality tires is the thickness of the rubber, for it induces safety and comfort and stability. The firm has statistically arrived at a “standard” tire thickness.

How many different conditions do you need to experience to be able to reliably ascertain whether “A” is better than “B” or not?

As such, a Design of Experiment is centered around Factors, Responses, and Runs. We are interested in how a Factor affects a Response and we do in several Levels or Runs.

Here are 2 examples where Design of Experiments can be applied:

What is the best method to prepare microwave popcorn? The Response you want is this: the best outcome is the bag with the most popped corn kernels.

Below are the Factors:

Another application of Taguchi’s Design of Experiments is for testing elements of a website landing page that lead to the desired outcome, whether the outcome or conversion is defined as a sale, email sign-up, click through to the next page, etc.

In general, the steps to test the elements of a landing page are similar to the steps above:

The elements on a landing page are Factors. The number of times and variations you run a Taguchi Test are the Runs. And, the outcome or Response is Conversion.