The Pareto Principle is alive and well and it can be seen everywhere.

Here’s an example of Pareto: In a recent Nielsen study on Cell Phone Text Usage, we find a very interesting pattern when the data is displayed by age: 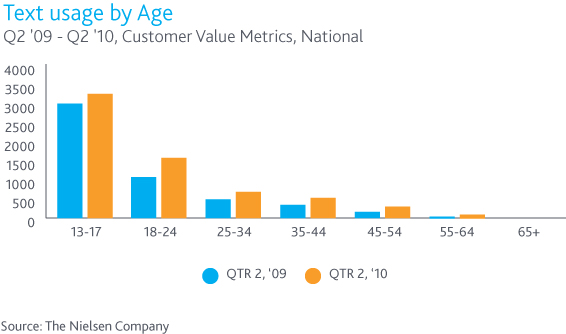 According to the study:

If it seems like American teens are texting all the time, it’s probably because on average they’re sending or receiving 3,339 texts a month. That’s more than six per every hour they’re awake an 8 percent jump from last year. Using recent data from monthly cell phone bills of more than 60,000 mobile subscribers as well as survey data from over 3,000 teens, The Nielsen Company analyzed mobile usage data among teens in the United States for the second quarter of 2010 (April 2010 June 2010). No one texts more than teens (age 13-17), especially teen females, who send and receive an average of 4,050 texts per month. Teen males also outpace other male age groups, sending and receiving an average of 2,539 texts. Young adults (age 18-24) come in a distant second, exchanging 1,630 texts per month (a comparatively meager three texts per hour). -http://goo.gl/4p7n