What is the Right the First Time Principle?

Home » Business » What is the Right the First Time Principle? 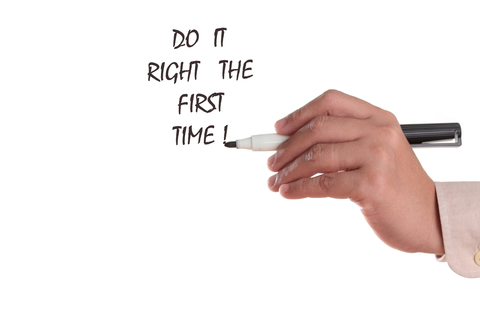 Releasing a new product is always a stressful ordeal. No matter how much research and effort may have gone into bringing it to the market, there is always a significant risk that it’s going to flop, simply because you didn’t consider some important point that didn’t seem so notable at the time. Recently, a lot more attention has been focused on making your first release successful, as companies are starting to realize that improper releases are nothing more than a type of waste that can, and should, be avoided. This is where the Right the First Time principle comes into play.

Building on past Experiences

Depending on how you’ve been collecting the information about your previous releases, your data may or may not be in a good enough condition that allows you to immediately work with it. A crucial part of implementing the right the first time principle is to sanitize all your data and ensure that it actually makes sense with regards to what you’re trying to do. For example, you can remove unnecessary shipping-related information from the data sets if the problems you’re trying to resolve/prevent are entirely in the production phase.

Identifying the Critical Points of Failure

When you’re going through the analysis of a failed product, you’re likely going to see many points which can potentially be targeted for improvement, and it can be a bit difficult to figure out exactly which of them are worth addressing. Working with a clean, well-structured data set is so important because it will allow you to pinpoint the exact issues that led to the downfall of the previous project.

Once those points have been figured out, the next step is to ensure that they will not be repeated. This depends entirely on the nature of the specific problem, and you will need a good degree of experience in your particular part of the industry in order to make a sound decision here.

The Right the First Time principle is great, and when there is no incentive to pursue it, negative developments tend to occur. The video games industry is perhaps most susceptible to this, and the results have been showing for quite some time.

It used to be that video games made for console platforms had to go through rigorous testing and verification before they were allowed to the market. Getting a release right the first time was critical, and companies used to put a lot of effort into it. Now, with the ability to deliver huge patches on the day immediately following the release, many developers have relaxed a bit and the result is a constant influx of half-finished games that rely on those patches to actually work properly.

The point is that the Right the First Time principle can be of huge benefit to many types of businesses when applied correctly, and even just the fact that it motivates companies to avoid repeating their past mistakes should be enough to drive any good leader to explore it in more detail. There is a lot to learn about getting a release right the first time, and the sad reality is that you’ll probably need to fail a few times before you get there too.

Studying this principle is important, even if you don’t end up applying it that deeply to your own projects. It can help you develop a strong intuition for the right steps that you need to take in the development of a project, and if you collect and analyze your results in an organized way, it will give you a huge boost in productivity later on when you need to release more complicated products.