Root Cause Analysis at NASA

Root Cause Failure Analysis is the term used at NASA – National Aeronautic Space Administration. Due to budget cuts, NASA was recently closed, but there are some good lessons-learned from when we did have a space program. One of those is their approach to Root Cause Analysis. Their approach is interesting, but also reveals a big weakness that we can all learn from.

I’ve written before about Root Cause Analysis:

The term used at NASA was Root Cause Failure Analysis. that subtle change is important because their focus was on any failure – mechanical, system, or otherwise – that prevented the successful launch and landing of a spacecraft mission. In their words,

The objective of root cause failure analysis is to identify root cause(s) so that these latent failures may eliminated or modified and future occurrences of similar problems or mishaps may be prevented. One failure of analysis pitfall: If root cause failure analysis is not performed, and the analyst only identifies and fixes the proximate causes, then the underlying causes may continue to produce similar problems or mishaps in the same or related areas.

They provide an example,

For example: A fuse blows out and cause(s) the lights to go off. You can identify the proximate cause, fuse blew, and replace the fuse. You can also identify the intermediate cause a short and repair the wire that shorted. However, if you do not identify and correct the organizational factor that led to the fuse going out (e.g., wiring not maintained because there was insufficient maintenance budget), other systems may have similar failures due to lack of maintenance. Root cause analysis seeks to identify the systemic problems, such as lack of maintenance budget, and correct these so that related problems or mishaps do not occur.

NASA also uses an approach they call a Causal Factor Tree, which is a visual picture of the root cause analysis and their potential countermeasures or, in their words, corrective actions:

One glaring outcome from the NASA approach to Root Cause Analysis is a bias toward pointing to organizational issues. For example, take a look at the example below: 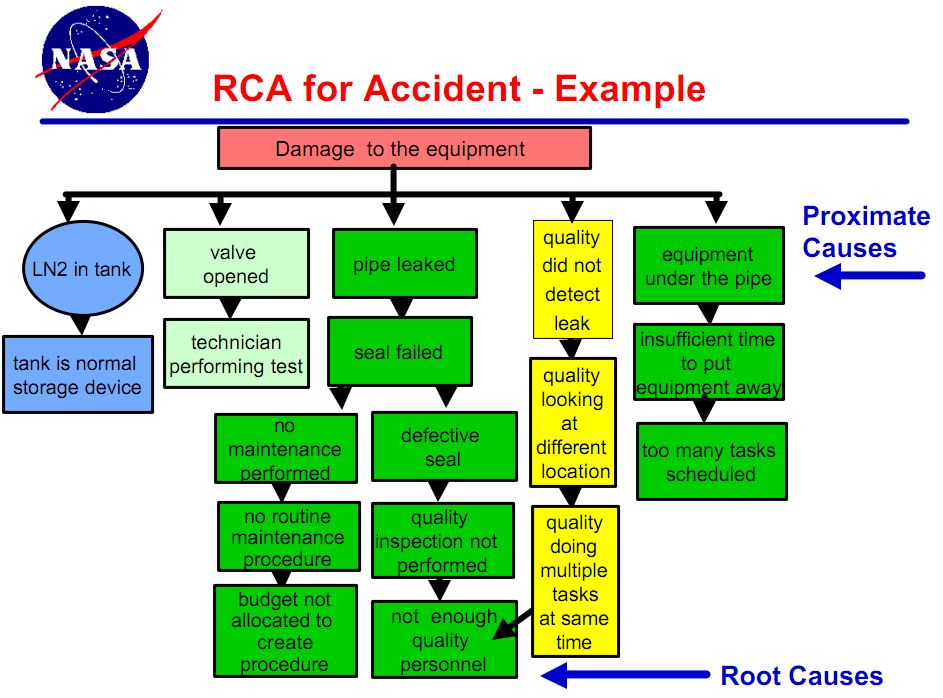 Notice that in this example, the root causes that this team arrived at were issues around Budget. To some degree, this is emblematic or stereotypical of government-run programs, where the focus at times is on money, or lack thereof.

But, we know that in the true spirit of Kaizen, it is about Mind Before Money, Creativity Before Capital, and Wits Before Wallets.

NASA, we’ll miss you. It’s too bad we couldn’t sustain a long-term space program. Maybe someday. In some distant future.