What Is A Standardized Work Process Capacity Sheet? 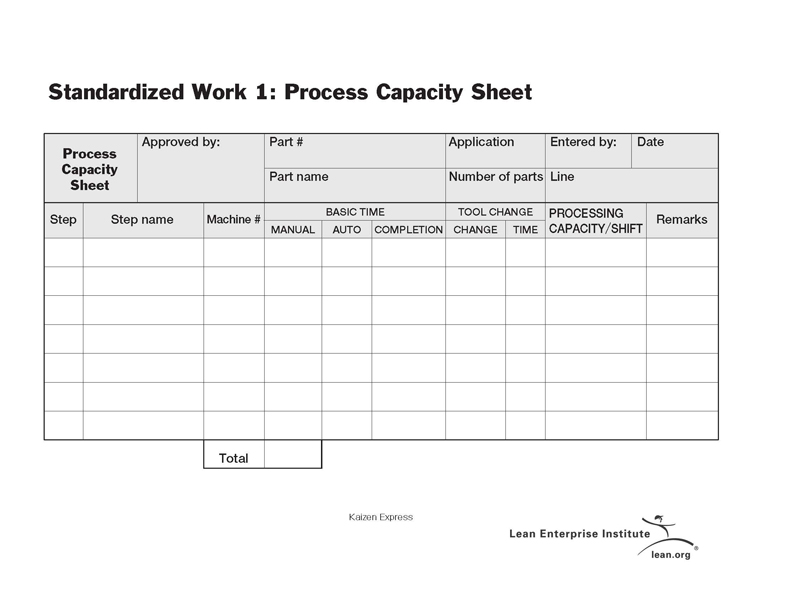 One of the fundamental steps in implementing standardized work in your organization is the Process Capacity Sheet. When used correctly, they can be a very powerful tool for gaining a deep insight into the resource usage within the organization, and you’ll see the exact conditions surrounding the utilization of each resource type.

The typical Process Capacity Sheet records several key data points. Each employee fills out their own sheet separately, and they must additionally track the specific part numbers they’re working on (or the corresponding equivalent in your own production type). Then, the employee must also fill out the name of the work area where they performed their tasks, and describe the process they were carrying out there.

Then, there are columns for several types of timing measurements. One of those is the Basic Operation Time, which is self-explanatory; it’s followed by the Manual Work Time, which indicates how much time was spent specifically operating the corresponding piece of machinery (that is, excluding any maintenance procedures leading up to that and following it).

Automatic Feed Time indicates the duration for which the machine is carrying out its own task without intervention from an operator. This can be a very useful measure to focus on when trying to figure out the source of a bottleneck, although it can sometimes be misleading depending on how your company’s machines are operated.

Last but not least, the sheet also measures the Total Cycle Time or Completion Time, which is the total amount of time that the machine needs to complete its full job. This is typically a combination of the previous two times, although that’s not necessarily always the case, and some organizations have a much more specialized production chain that might involve other formulas.

Other important data points to measure in the Process Capacity Sheet include the number of tool changes, the time required to change the tooling, and the time per piece (which can be derived from other timing data subsequently).

It’s particularly useful when it comes to finding bottlenecks, which is why it’s so important to focus on filling out the Process Capacity Sheet at first, and ensure that it’s filled out correctly at every step. It might not happen immediately, but after some time has passed during the implementation of standard work in the company, some patterns will start to emerge in the data produced by these sheets.

Filling out the sheets is just one part of the formula though it’s just as important to keep precise track records of the results from each of the previous sheets. This will allow the company to build a profile of the way its resource utilization has been changing over time, and you’ll be able to see if the situation is improving or deteriorating.

This will also help you stabilize more turbulent periods in the data sets you have available. If there is significant variation in the results from one week to the next, this might be caused by a temporary resource shortage, rather than a more serious problem within the organization’s core.

Caveats and proper use

Because of this, the proper use of a Process Capacity Sheet can help your organization’s leaders always be sure that they’re making an informed decision based on correct facts, instead of making assumptions that later turn out to be incorrect and end up harming the whole company.

There might be some differences in how your organization fills out its own Process Capacity Sheets compared to others, but the important thing is that you maintain a standard for everything. That’s, after all, at the core of what you’re trying to accomplish in the first place.

As long as the company maintains a common way of work and everything is controlled and recorded, you shouldn’t see any problems implementing standard work in the organization. The important thing is that you always have an objective overview of the progress you’re making through your efforts, so that you’ll know if those efforts are in the right direction. If the whole company is on board with this transformation, you’re inevitably going to see some fantastic results later down the road, no matter how large the organization might be or what area of operation it’s involved in.