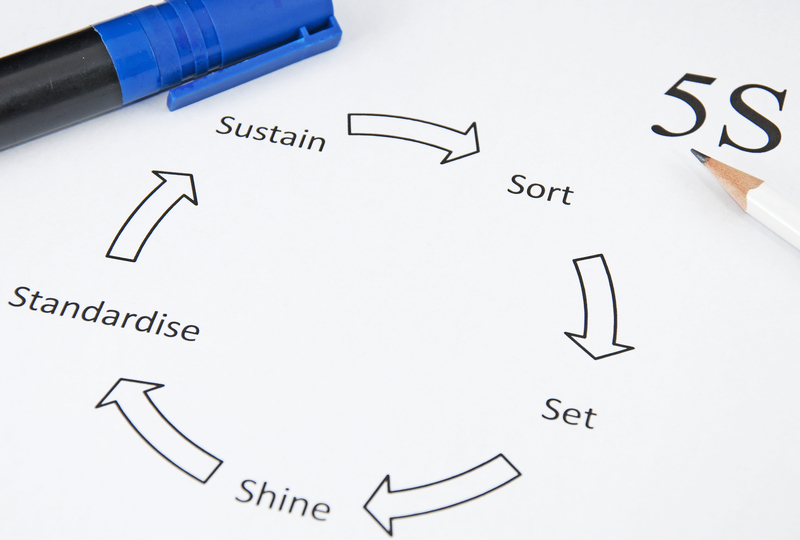 5S is a practical approach to organizing a modern working environment, and it can be highly useful in a variety of different situations. It originated in Japan, much like many other prominent methodologies in the lean family, and it’s focused on ensuring that work can be done as efficiently as possible, identifying and removing waste while focusing on the tools and processes that are truly valuable.

The name of 5S comes from the Japanese names of five principles, although their English names have been translated in a way that preserves the acronym as well. They are sort, set in order, shine, standardize, sustain.

This also applies to tools that are currently not being used, as well as already completed products that are awaiting transportation to another node of the manufacturing chain. If something cannot be cleared right away, it should ideally be left in a dedicated zone that doesn’t obstruct the worker’s routine.

As long as you’ve followed the previous steps and everything is arranged and tidied up though, there should be no reason to have any difficulty implementing this particular step of the process. If anything, implementing standards should become much easier once you’ve started to see some patterns emerge from your previous efforts. You’d be surprised how much you can learn about the way the company works from applying those principles.

5S in the digital world

In today’s work environment, we continue to move towards the paperless office, where everything is digital. The 5S approach can be applied to your electronic files using these same steps

The 5S method can be highly effective in ensuring that your company is moving towards a common goal that unites everyone within it, and that you’re prepared for the future too. It takes some effort to get everything in place, but once you’ve got the ball rolling, it will be a very smooth experience from then on. Of course, you’ll also want to ensure that the 5S process is being followed regularly and not just implemented once, but that falls under the category of discipline.