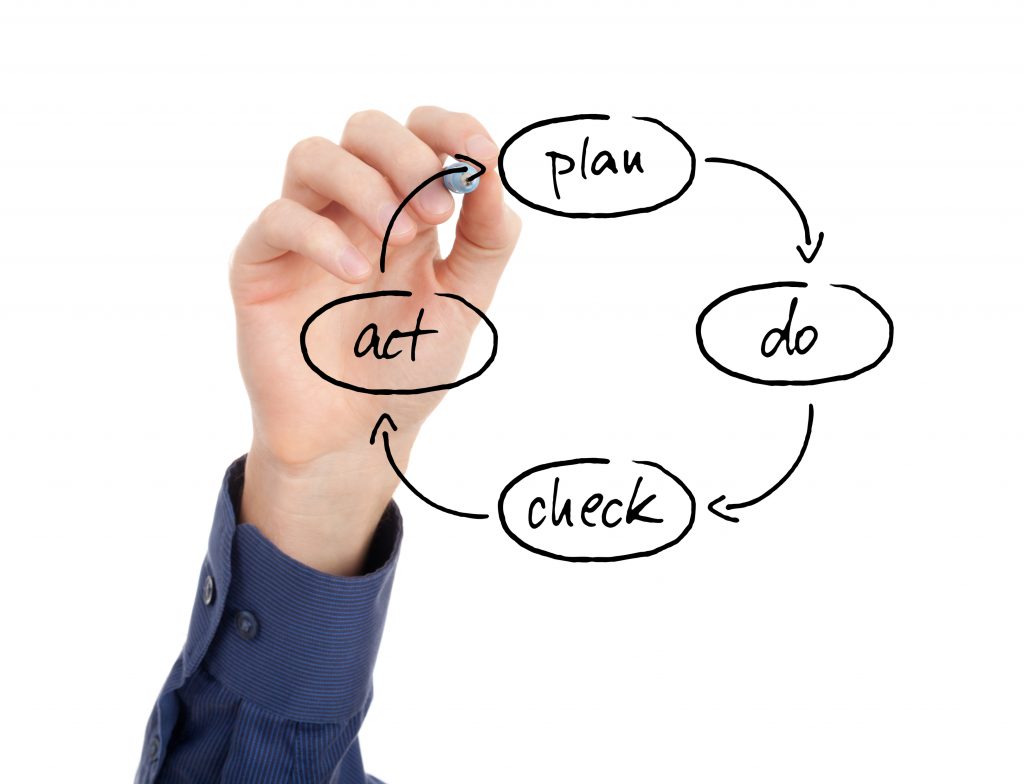 The Plan-Do-Check-Act cycle is a popular business management method to achieve continuous improvement in an organization. It is widely implemented as a part of a tool within larger improvement methodologies, or as a stand-alone approach to quality control and change management.

The PDCA cycle was popularized by Dr. W. Edwards Deming, and is sometimes referred to as the Deming cycle. It was loosely based on the scientific process, which starts with a hypothesis, continues with an experiment, and finishes with analysis and a conclusion. Those steps correspond to the first three steps of the process. Since the cycle needs to lead to actual results, the last step is meant for taking action and making changes.

But in order to really understand the PDCA cycle and why it works so well, we need to first look at each step in more detail.

The cycle begins by establishing a hypothesis about a possible improvement. In reality this step of the process can actually be broken down to two sub-steps. The first thing that needs to be done is outlining a clear problem, or imperfection in the current state of affairs. The second thing that needs to be done is making a plan for fixing it. The plan should not only induce the changes that need to be made, but a step-by-step implementation strategy as well. Remember, most of the Plan phase is to investigate what is going on, determine the causes, and identify possible solutions. Most of your time should be spent on Plan, otherwise you will be guessing and having to go back through the PDCA cycle multiple times.

After the blueprints for the solution of the particular problem are ready, they can be implemented so their effectiveness can be tested. This means not just making a particular change and being done with it, but monitoring it continuously while the experiment is going on, and recording as much data about the change being made. Collecting data on the correct metrics provide the evidence needed to determine if it truly is working or not.

After the test has been running for a while, the company should have enough information on how the proposed and provisionally implemented change affected the problem. This data needs to be analyzed, and the results need to be measured compared to the hypothesis from Step 1. This allows you to determine the effectiveness of the implemented solution.

In this last step of the cycle, the conclusions made from the test can be put to practice. If the tested solution has some significant outcomes and is cost-effective, it should be implemented. If not, another one must be investigated or a more economical solution needs to be identified. Either way, it’s important to remember that this step is only nominally last, and it is not the end of the process. The cycle should be repeated again and again, and should lead to constant improvement. This will help drive a culture of continuous improvement.

What Makes the PDCA Cycle Effective?

The PDCA Cycle gives an easy to understand framework for iterative improvement. It depends on real-life experiments (not educated guesses), and forces teams to review the data and evidence in order to draw conclusions. Being based on the scientific method, this cycle can be viewed as an approach that has proven itself, and that can reliably produce improvement.

One of the main benefits of implementing a PDCA cycle is that there is a clear separation between each iteration that is tested, allowing for true causality to be established. This will inevitably lead to a reduction in waste, and increase productivity in the long run. The processes becomes better and better understood, and more and more problems are uncovered and solved.

Making the PDCA cycle a part of the way a company operates minimizes the risk when implementing change by increasing control. It also establishes a commitment to constant betterment and improvement that allows a company to remain competitive, and to constantly improve and adapt.