Lean Startup Customer Discovery is critical for business success. Through the practice of Genchi Genbutsu, receiving feedback from real customers, and spending time with customers, acting on what customers tell you increases the chances for product/market fit and startup success.

Steve: When I first started at Conversion Technologies, the founder Allen Michaels had left Intel and he believed he was going to be making a single board computer. A computer that fit on one circuit board back in the early 1980s was a radical notion. And what Allen did was he went around to computer companies and said, “Look what I got. How many would you like?” and they all kind of knew Allen from his work at Intel and said, “Wow, that’s great. We’ll take three for our R&D Lab.” And Allen went, “No, no, no. I’d like you to take 3,000.” The first company he went to they said, “Allen, we’re looking at a new type of computer, but it doesn’t even have a case, it doesn’t have an operating system, it doesn’t have any applications. It’s a nice building block, but maybe we’ll take three and maybe we’ll license the design from you.”

So Allen went to another company, this time NCR, and he gave them the same pitch and they said, “Allen, we’ll take five.” He said, “Five thousand?” “No, we’ll take five.” Gave him the same story, “It doesn’t have a box and whatever . . . ” And finally Allen went to the third company, a company called Burroughs at the time and they said, “Allen, you know we’d take ten.” He said, “Oh, oh, oh, you mean you’d take ten boards? Absolutely, but would you like to see my box?” And they said, “Well, you didn’t mention a box when you . . . ” “Aw! Let me draw the specs of the box. It has an enclosure.” And they said, “Oh, great! Does it have an operating system?” “Absolutely! It has an operating system.” “What else does it have?” “Well, what else do you need?” “Oh, does it have a word processor?” “It has a word processor!” “What else were you thinking about? Oh, it has one of those!”

Right there in discovery, Allen finally realized that what he was hearing was that what he had was good enough to get three, but was missing a couple of zeros. Now of course he had to go back to the rest of his company which had all of seven people and said, “Good news! I just got an order for 10,000 computers from Burroughs. Bad news is we need an operating system and a set of applications.” And his co-founder Bob Garrow looked at him like somebody hit this guy with a brick, because he was clearly . . . He said, “Allen, you know, this is like 1987. You just don’t like off the shelf get an operating system and a set of applications.” And so Allen, being a great entrepreneur, said, “Well, where do you get them?” And Bob said, “We’re in Silicon Valley. I don’t know. Xerox Park? What are you going to do, hire Xerox Park?” He hired the head of the advanced system division of Xerox Park, who came with an operating system and the guys who wrote the Bravo word processor became the convergent machine.

He went from a company that potentially would have sold 25 boards in the first year, to one that actually sold its company four years later to Burroughs for 400 million bucks. Now that’s an interesting story about Discovery with Allen was good at listening. But what’s even more interesting is what happened at his next company, called Ardent. Allen was now a successful CEO. In the early ’80s Allen Michaels was well-known in Silicon Valley, bad boy in Silicon Valley. Kleiner Perkins, everybody wanted to fund his next company, anything he wanted to do.

Allen decided he’s going to build a graphic super-computer. A cross between a Cray and a Silicon Graphics, which in hindsight turned out to be exactly if you were making a floor wax and dessert topping in one. It’s the null set, but we only found that out later.

This time Allen Michaels was not in the field talking to customers. Where do you think he was? Any idea? Second company, successful CEO, where was he?

Male: In the office.

Steve: In the office. Who was he talking to? His investors. Who was the people in the field talking to customers? His VPs. Particularly his VP of Marketing, yours truly. And customers were saying, “Steve, this is the worst combination of product features we’ve ever seen [chuckles]. But if you ripped off this piece and just gave us the server, the price performance of this stuff is really . . . and if you change the vector unit to do this, it was great.”

So, an important heuristic here. If you’re going to do customer discovery at all . . . and by the way, he never listened. Company went out of business. Painfully. One of the wonderfully enjoyable failure sagas of Silicon Valley. If I had two hours I would tell you. But here’s another heuristic. If you’re going to go out and discover whether customers like your idea or not, this is not an outsource-able problem. The founders need to do this. Particularly the people capable of changing strategy need to be the ones hearing good news and bad. Why? Because it’s like hiring some consulting agency. “Oh, what do they know?” Or worse, “Steve, you’re just not explaining it well enough.” Anybody ever hear that one? “We just need to explain it harder.” Getting feedback from customers is the most valuable thing you will do as entrepreneurs. It is not outsource-able and if you’re a technical founder don’t believe that, “Ooh, I’ll hire a professional salesperson and they’ll sell it for me,” without you ever, ever leaving the building.

Your Baby is Ugly

If your product vision is not accepted by a market, then you must learn to pivot and adjust. But, the founder and the engineers must spend time in the field – Genchi Genbutsu cannot be outsourced. 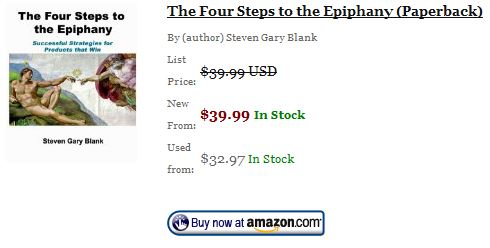