Digg as a Game: Applying Game Theory to Digg and Voting Systems

Update: This article was dugg and made it to the Digg front page. The traffic came and I discuss the aftermath here. Go here For a Primer of Majority Rule in Social Networks.

Below is the voting chart for that story: 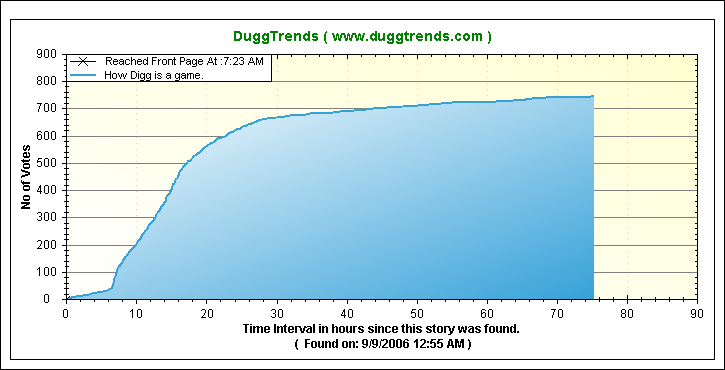 Inspired by Greg’s insightful post, I thought I’d take a minute (or more) on explaining how Digg is a game.

Elements of a Game

In Game Theory, we care about the elements that arise from interactive decisions. Below are the main elements of a game:

How does Digg work?

I’ll use Philipp’s concise summary of how digg works:

In graduate school, I played a really fun and revealing game called “The Urn Game.” The game shows very simply how the concepts of GroupThink, Conformity, Paradigm Shift, and Information Cascades work. Here are the rules of the game:

There are two indistinguishable urns. Urn “W” has two white balls, one yellow. Urn “Y” has two yellow balls, one white. A proctor will flip a coin to choose an urn. You must guess which urn it is after seeing one ball from the urn AND AFTER HEARING ALL THE GUESSES OF THOSE BEFORE YOU. Your goal is to choose wisely.

In our version of the game, 8 students were called per round (new urn-draw each round). At each turn, draw out a ball without looking at any others and without showing the ball to anyone else. Return the ball to the urn, write your guess on the provided sheet, then give the sheet to the proctor.

Playing this game reveals a few things that are relevant to digg and to all social software:

Digg is not a Prisoner’s Dilemma

In response to Alex Bosworth’s thoughtful post, Digg is not a Prisoner’s Dilemma. Some applications of Game Theory work, and some don’t for certain situations. For example, Nash Equilibrium is not the right concept for some strategic situations.

A Proposed Way of Thinking about Digg

Digg is the online version of The Urn Game. What I see are power users, typically the first movers, wherein a vote is casted by one of the top diggers, and then a flood of comformity follows — that is, voters follow the first movers, typically the power users, and ignore their own rational feelings about the article being dugg and vote anyway, following the power user’s vote. At a wholesale level, this creates an information cascade, such that the Nth vote conveys no more information than the first 2 votes. Philipp is right in his analysis on Groupthink — but, it’s more than that: Digg is a system that allows the power users to swing the behavior of an entire group.

What is changing however is how we are handling story promotion. While we don’t disclose exactly how story promotion works (to prevent gaming the system), I can say that a key update is coming soon. This algorithm update will look at the unique digging diversity of the individuals digging the story. Users that follow a gaming pattern will have less promotion weight. This doesn’t mean that the story won’t be promoted, it just means that a more diverse pool of individuals will be need to deem the story homepage-worthy.

I’m not sure what he means. But, arrington apparently gets it (or pretends to). I think what Kevin is saying is that Digg will weigh votes, based on the unique user’s historical profile and voting data. Still, it’s vague and I’m not sure what he’s talking about. But, it sounds interesting.

I think this is the right thing to do. Digg needs to continue to encourage people to recommend stories to their friends, but also find ways to get truly unique and interesting stories to the home page without the sponsorship of a Digg user group. Hopefully the algorithm changes will help. Another suggestion to improve things that I recently passed on to Digg CEO Jay Adelson: weigh a story digg more if it comes from perusing the upcoming stories area v. someone hitting the story via a direct link. Since friends often email or IM stories around via the direct link, it’s more likely to be a vote from a group. A digg from the upcoming stories page is much more likely to simply be a user reviewing stories and picking the ones that he or she thinks are important.

Arrington’s suggetion is truly lame — to weigh a vote coming from a previously dugg article completely supports the concept of Information Cascade.

Calacanis, of course, has to chime in:

Calacanis — I like you, I really do — you’re level-headed and you go against the tide, but you’re wrong on this one. Digg and most social software smooth over time, and can eventually be approximated by a poisson distribution. This distribution is what Pareto is built on; this means that social software — Digg, ‘Scape, and all of them are not Democratic — they are Republics. A truly democratic society would mean that all votes are equally weighed — a majority rule –, but that’s not the case with first-movers and top-diggers.

If Digg were to be relevant again, it must tackle the problems of GroupThink, Conformity, Paradigm Shift and Information Cascades.

Doing the above 2 items will most likely fix the Paradigm Shift and Information Cascade problem.

What’s Left of Digg if Kevin Rose follows my advice?

If Kevin Rose follows my advice, Digg will become a user-generated meme, truly democratic, where the votes are equally weighed and blind to any first-mover, power-user, and irrational individuals that may sway the behavior of the group. The quality of the front page articles will be higher for sure. The social aspect of Digg will be compromised, but it will be relevant again.

Below are other who have joined the soap opera: