I saw this phenomenon recently during a visit to a fast food restaurant, which I discuss in this post — but, my application of the Theory of Constraints, Lean Manufacturing, and Six Sigma as applied to a Restaurant can be applied to any Dynamic System.

Every system has a constraint ” that is neither good nor bad ” but just a fact of dynamic systems.  Once you’ve identified the constraints in your system, then the next step is to manage it.

I was able to obtain some empirical volume data for a Burger King.  The data below is taken from one Burger King restaurant.  I imagine the numbers would be significantly different if we were to average the volume by geography, restaurant size, or by other factors.  Now, consider the following process map for a typical Burger King: 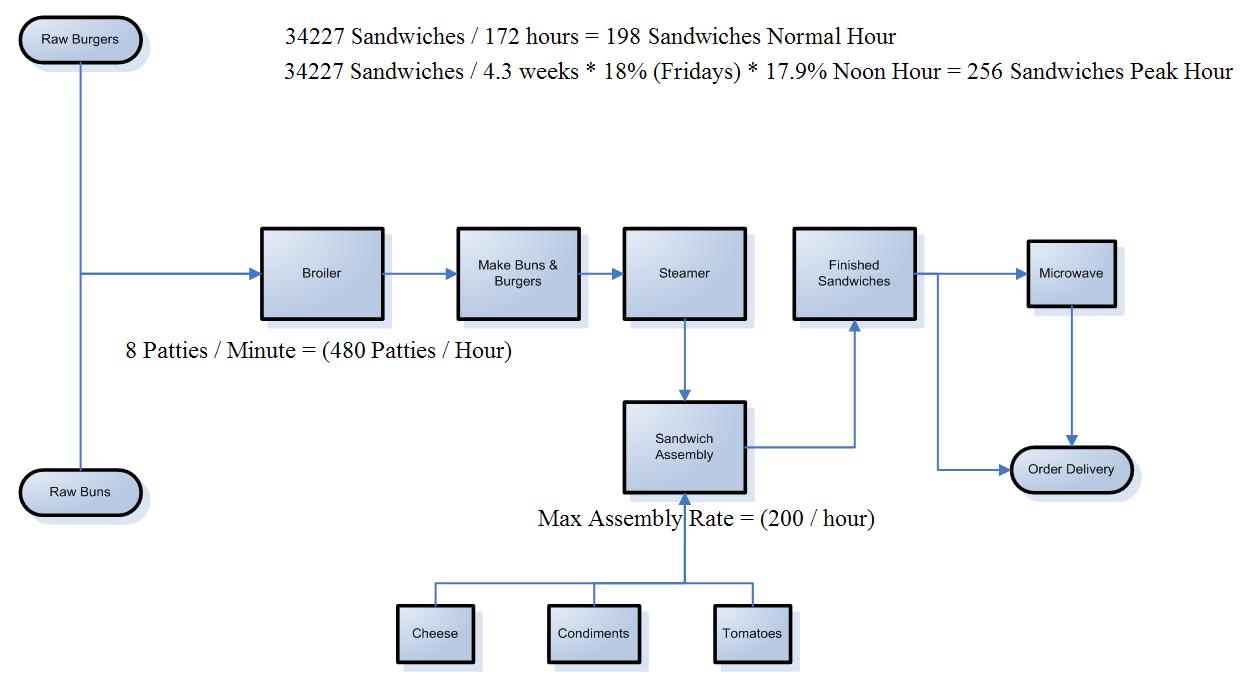 But, on Friday and at 12:00PM, Burger King experiences higher-than-normal volume and so we add a “Peak Multiplier” of 18% and 17.9% to arrive at 256 sandwiches during Peak Hours.   The “Peak Multiplier” is not completely arbitrary, but a quasi-educated guess at the volume increase during those hours.  In both cases of Fridays and Lunch Hours, we add a ~20% multiplier.

How To Manage a Constraint

Under normal hours, it appears that the Assembly Step can produce at expected demand.  But, there are several things that could put burden on the constraint and cause it to producing less than capacity.  Here are some of those items:

It’s easy enough to see that the Assembly Step needs some help.   Here are several things Burger King ” or any system with constraints ” can do to better manage the natural constraints that are in every system:

All systems have constraints.  Identify what they are, quantify the effects, then manage it.  The above Burger King example shows how this can — with some effort — be done.  What are the constraints in your systems?  What can you do to better manage those constraints?