How to Game the Net Promoter Score

Among other philosophical questions you’ve pondered, I’m sure you’ve also asked yourself “How to Game the Net Promoter Score?”. Well, I’m here to answer that question for you. How to apply an effective net promoter score program is a topic for a different day.

The Net Promoter Score measures loyalty to a service, product, but also to the brand. This is why the NPS in a properly implemented NPS Program also surveys respondents who are not customers. For example, have you ever visited a website while you are NOT logged in and are invited to take an NPS survey? The shear fact that you’re not logged in means the company doesn’t who you are, yet they want to know if you would be interested in taking their NPS survey. In this situation, what is being measured is affinity  toward the brand and overall sentiment to the brand or, rather, the perception that respondent has for the brand in question.

As a corollary to the first, survey only happy customers. If you survey only customers with the highest likelihood of being happy and satisfied, then your NPS will be high. In this scenario, it will be to your advantage to increase your response rate, as to get more happy customers responding to the NPS survey, further inflating the NPS.

The NPS Score is inversely correlated with Survey Response Rates. Why? Research has shown that customers who were surveyed but did not respond, behaved more like Passives or Detractors. If more and more of the “surveyed but did not respond” population begin to respond, then you can expect your NPS Score to decline. And because our motivation is to game the NPS Score to make it what we want and not have it reflect customer sentiment, we obviously don’t want this situation.

As a natural byproduct of the strategies described above, your response rates will be low. That’s okay. This means that your NPS will have the greatest likelihood of being high. The downside? Well, this improper implementation of the NPS Program means you actually won’t be collecting broad or big picture customer sentiment. The selection bias will be astronomically and statistically ridiculous. But, that’s okay. By keeping NPS Survey response rates low will most likely result in a higher NPS score, which is a really good way to game the NPS.

The above strategies are how some companies have implemented their NPS Program. I don’t believe the companies were deliberate in their gaming of the NPS, just misguided. Nevertheless, this leads to inflation of the NPS, making it impossible to do apples to apples comparisons of the NPS scores between industries or competitors.

An appropriate and proper implementation of the NPS Program (score only, not the Feedback Loop portion) is described below: 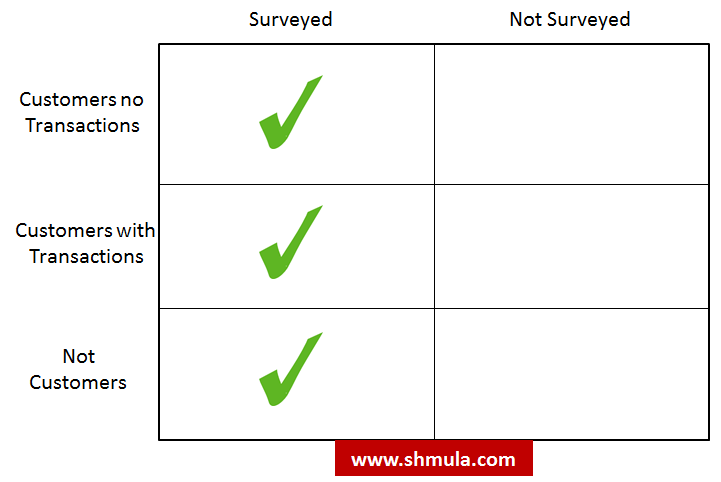 Implementing the NPS Program such that the broadest cross-section of your audience is surveyed and collected will ensure that the NPS will more likely be an accurate reflection of customer sentiment. To do so, it’s suggested that:

By surveying customers with transactions, customer with no transactions, and non customers but interact with your service or product or brand, you’ll be able to investigate the stratification of Promoter, Detractor, and Passive among the cross-sections of the respondents to give you a more accurate NPS and a Net Promoter Score that is not hacked, gamed, or manipulated.