Toyota is all about the customer. We hear a lot — and I’ve written a lot on this blog — about the Toyota Production System, anglicized in the United States as Lean, but we haven’t known much about the role of Information Technology at Toyota (go here for a recent interview on how to apply Lean IT).

Baseline Magazine has a great article on Toyota; specifically, the role of technology at Toyota1:

And behind TPS is information technology”supporting and enabling the business processes that help Toyota eliminate waste, operate with virtually no inventory and continually improve production.

Technology does not drive business processes at Toyota. The Toyota Production System does. However, technology plays a critical role by supporting, enabling and bringing to life on a mass scale the processes derived by adhering to TPS.

Over the years, Toyota refined a number of other concepts and production methods that support the two central TPS pillars. And behind each of those pillars are information systems, supporting and enabling the processes:

A case in point in how technology supports TPS and the customer:

In all, the Dealer Daily [Toyota’s application for car dealers] incorporates more than 120 business applications, and like all Toyota initiatives, it is constantly undergoing Kaizen to look for more improvements and opportunities to remove Muda. Case in point: Toyota recently added the capability for dealers to find out which vehicles it has in the production pipeline, and make changes such as switching a cloth interior to leather. (Dealer Daily is integrated into Toyota’s mainframe systems through file transfer protocol and System Network Architecture [SNA], IBM’s proprietary networking architecture, although Web services are now being explored.) By logging in the next day, the dealer can find out if the changes were received in time and accepted. This allows the dealers to more closely customize orders to actual customer demand.

Here’s a look at the current proprietary technologies at Toyota, all modified to support the business: 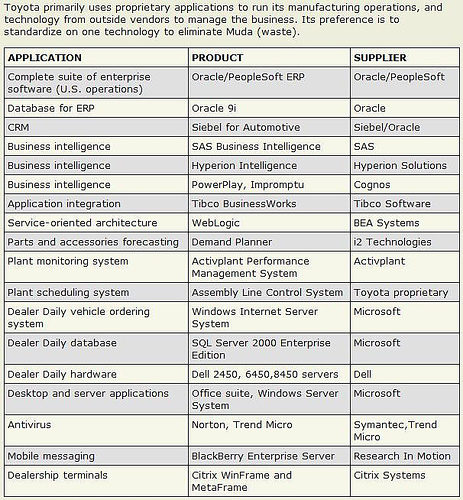 For those wanting to work with Toyota, apparently it’s not easy:

“We know that at times it can be a very frustrating experience for companies who aren’t used to working with us,” says Millie Marshall, vice president of information systems for Toyota Manufacturing North America. “But we like to think we give back a lot to our vendors. We try to grow with our vendors, and teach them our methods for problem solving and how Toyota does business.”

But, it could be a very beneficial and very long-term relationship.