Bain and Company recently published their Benchmarking Management & Tools 2007 Survey, which is a benchmarking study showing Executive Satisfaction Survey on Lean Six Sigma Programs.  In that survey, both Lean and Six Sigma are included as part of the management tools used by companies.  What is interesting are the satisfaction rates of those tools, as reported by the executives that completed the survey.

Below are some data collection heuristics:

In 1993, Bain launched a multi-year research project to get the facts about management tools and trends. Our objective is two-fold:

Over the past 14 years, we have completed 11 surveys, assembling a database that now includes 8,504 respondents from more than 70 countries in North America, Europe, Asia, Africa, the Middle East and Latin America.  This year, we received 1221 completed surveys from a broad range of international executives.  We also conducted personal follow-up interviews to further probe the circumstances under which tools are most likely to produce desired results.

This year, we focused on 25 of the most popular tools and techniques, listed on the slide below. To qualify for inclusion, a tool had to be:

Perception and Satisfaction of Lean Manufacturing

Below is Bain’s explanation of Lean Manufacturing:

Lean Operations is both a methodology and philosophy that focuses on eliminating waste and reducing the time between a customer’s order and delivery. By trimming waste, companies — manufacturers of goods and providers of services alike — can achieve higher quality, increased productivity, improved customer interactions and speed. The goal of Lean Operations is to get the right things to the right place, at the right time, in the right quantities, while minimizing waste. The Lean concept was pioneered by Toyota founder, Taiichi Ohno, as a much faster, better and less-expensive way of producing vehicles. Lean Operations redefines waste as anything the customer won’t pay for — everything from clerical errors to idle machine operators.  The process identifies seven types of waste:

There are three key elements in Lean Operations:

Five basic steps are used to improve the process flow:

While the Lean approach originally was designed for manufacturers, a broad range of industries now use the Lean concept to improve both operations and customers’ experience by:

Given the data heuristics and Bain’s definition of lean, below are some highlights on the satisfaction scores — or, executives satisfaction and perception of Lean:

Perception and Satisfaction of Six Sigma

Below is Bain’s explanation of Six Sigma:

Sigma is a measure of statistical variation. Six Sigma indicates near perfection and is a rigorous operating methodology aimed to ensure complete customer satisfaction by ingraining a culture of excellence, responsiveness and accountability within an organization. Specifically, it requires the delivery of defect-free products or services 99.9997 percent of the time. That means that out of a million products or service experiences, only 3 would fail to meet the customer’s expectations. (The average company runs at around Three Sigma, or 66,800 errors per million.)

To raise operations and product designs to the highest benchmark, Six Sigma programs constantly measure and analyze data on the variables in any process, then use statistical techniques to understand what improvements will drive down defects.  Such programs also incorporate a strong system for gathering customer feedback. Companies have applied Six Sigma to functions ranging from manufacturing to call centers to collections.  Some companies estimate that the Six Sigma methodology has helped them realize savings upwards of $1 billion.

Companies use Six Sigma to set performance goals for the entire organization and mobilize teams and individuals to achieve dramatic improvements in existing processes.  More specifically, Six Sigma can:

Here are the satisfaction highlights:

Below is a chart showing the tools surveyed and the satisfaction scores: 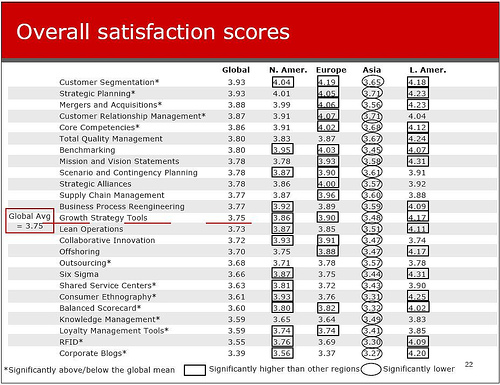 Here is a peception map, showing Usage against Satisfaction Rates: 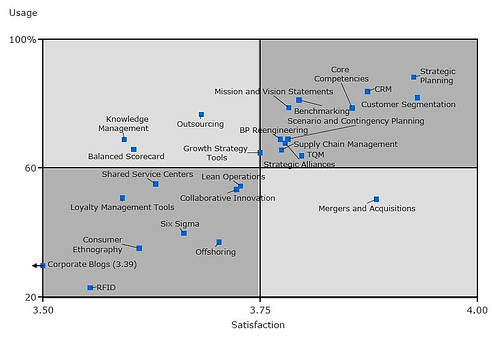 If we find the integrity of Bain’s data to be sufficiently strong, then it’s clear that Six Sigma is losing favor in both usage and satisfaction.  A 2006 defection rate of 6% (above the defection mean) and a satisfaction score of 3.66, (below the mean) is emerging evidence that executives from different industries and company sizes have a declining perception of Six Sigma.

For me, the data shows the propensity for companies to tout “flavor-of-the-day” tools, methodologies, and initiatives that likely be abandoned at a later time, as evidenced by the mean defection rate.

What does this mean for those of us who are practitioners and supporters of Lean and Six Sigma?  I believe to increase satisfaction, we must show results.  It is ridiculous and not pragmatic to hold Lean or Six Sigma at a religious status, as some might be accused of doing.  Tool, method, or system fanaticism to the side, we must show results.

At the end of the day, executives and others will judge a methodology or tool or system by what it has done for them and for the firm.  True, Lean is a system that must be practiced as a system in order to wholly benefit from it.  For companies not mature or ready to fully understand that concept, it might make sense to slowly immerse them in Lean, and that might be done tool by tool, method by method; not as a whole system immediately.  Similarly for Six Sigma.

Results.  Lean and Six Sigma must show results.  How has the firm saved money, time, or resources?  How has the firm opened new markets and increased revenue?  Is the customer more delighted than she once was post implementation of Lean or Six Sigma?  We must keep our eye on showing and demonstrating results that are beneficial to the firm.  That is the only way satisfaction rates will recover from their declining trajectory.