There are some arguments not to begin a Lean Transformation with 5S. I agree with this. But, this article is not about the broader Lean Tranformation, but about the method itself.

5S is part of the Toyota Production System, anglicized in the US as Lean. 5S is a reference for standardized cleanup, order, or tidyness. Defined,

The 5S supports other Lean ideas such as the Visual Workplace, SMED (Single-Minute-Exchange-of-Dies), Total Productive Maintenance (TPM), and to some small measure Just-in-Time (JIT). 5S is also a foundation for Safety in the workplace.

I’ve seen companies try 5S and fail. The Toyota Production System, besides all the jargon and pragmatic concepts is, at bottom, a culture. 5S is part of the Toyota culture. When I’ve seen 5S fail, it was because it was part of a mandated program, not a self-organizing, organice one, that is supported and pushed by the workers.

Here’s an example: At Toyota, Hebron, Kentucky, at the end of the shift it was expected as part of the culture to clean your work area. But, there was a short time where some workers were systematically *not* performing 5S after their shift. Why?

A self-organized team quickly got together, and conducted a root cause analysis, and followed the Plan-Do-Check-Act pattern. They brainstormed and used an Ishikawa Diagram to help them arrive at the root causes for why 5S wasn’t being performed at the end of shift. This Kaizen activity was done in just a few hours, and the output of which were root causes and a detailed plan to eliminate them with a deadline and people responsible for making it happen.

Once ingrained in the culture, concepts such as 5S, JIT, SMED, NVA, etc, are just part of work. Doing them and participating in them is part of the collective consciousness of the workplace.

5S is an important concept; a foundation for safety and exposes the time-traps and non-value-added activities that might be present in your process or workplace. But, to fully benefit from 5S, it’s important to try to make it part of the culture; part of the collective consciousness of the workplace.

Want to learn more about 5S and visual factory?
Download the free training packet below! 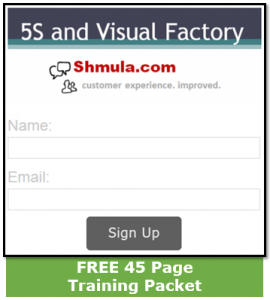