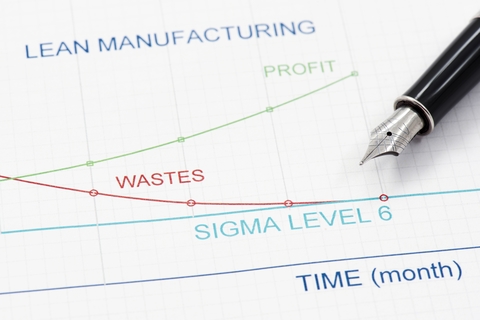 Dealing with waste and removing it from every aspect of an organization’s workflow is at the core of Six Sigma, and those with long-running experience in manufacturing can probably immediately point out some of the most common causes of waste that they’ve encountered in their regular work. Knowing what some of those most problematic areas are and learning to avoid them can be invaluable in planning the future of your organization, so any responsible leader should dedicate some of their time to study those common points of failure.

A well-functioning plant should propagate knowledge to its intended recipients as quickly as current technology allows for, at least in areas where this knowledge is critical. The controller of a packaging machine doesn’t have to wait to learn the size of an incoming batch if this data can be transferred between the machines themselves and updated in the appropriate registries. Clever use of modern technology can significantly shorten the amount of time needed to make critical events known, which in turn can prevent a huge number of common problems and reduce waste by a large value.

Failing to learn from past mistakes is another common reason for companies to waste a lot of their resources, and more often than not this is the direct result of improperly documented procedures. Everything relevant to the plant’s current operations should be stored in an organized database that’s easy to access in the future and is kept for a long term.

That way, when you run into a problem later on, you can call on past reports to gain a deeper insight into what could have gone wrong. If the company has already dealt with this sort of issue before, you can save a lot of time in the present by ensuring that you don’t repeat previous mistakes when attempting to resolve the problem.

Another point that surprisingly many plant managers fail to realize until too late is that it’s important to have a sensible physical design that allows for seamless future expansion. The last bit is critical and usually the part that gets ignored; your plant may work perfectly at the moment, but if you suddenly face a period of rapid expansion that calls for the construction of new facilities, you might find yourself in trouble if the design isn’t conducive to natural expansion.

Thinking in modules and connecting parts of the company via inputs and outputs is a habit you should work hard on developing, at least if you want to ensure that the organizations you lead can actually have a good chance to grow into something great in the future.

Just because the current setup worked great last month doesn’t mean that you should leave it untouched indefinitely. Most markets are highly volatile from a producer’s perspective, especially in today’s rapidly moving world.

This means that everything the company does must be coordinated with the current state of the market, and you have to always plan your future moves with forecasts in mind. This should be pretty much obvious to someone with a lot of experience in running successful plants, but you’d be surprised how many people there are out there who completely fail to observe the importance of this idea. In fact, you don’t have to look long to find some companies that would make you seriously question how they are still in operation upon realizing that their operations are based on methods that were made obsolete decades ago.

This kind of problem often becomes most obvious during periods of rapid expansion when large numbers of new employees are brought in. If the organization lacks a proper structure for training new workers and bringing them up to the level of their peers, you’re going to run into some serious slowdowns sooner or later and it likely won’t be later.

What’s even worse about this specific kind of issue is that it takes some time to manifest itself. New workers are hired, they go through a mandatory training period, they settle in their positions, and then once things look like they’ve settled down, trouble starts popping up left and right. Having to restructure the workforce of a production plant at this stage can be disastrous and can quickly lead to the death of the whole company.

We touched on this above briefly, but it’s an important point that deserves its own section. The modern world of technology offers a huge number of solutions to common problems in production plants, problems that often boil down to needlessly relying on manual work to do tasks that should normally be automated.

This is highly specific for the industry you work in, but you should spend some time consulting with automation experts to find out what processes in your plant can be shortened or removed entirely.

This might make some people unhappy as it could result in a reduction of the total workforce, but in the end, it will still be in everyone’s benefit since the plant will be able to work much more efficiently and trouble-free in the long run.