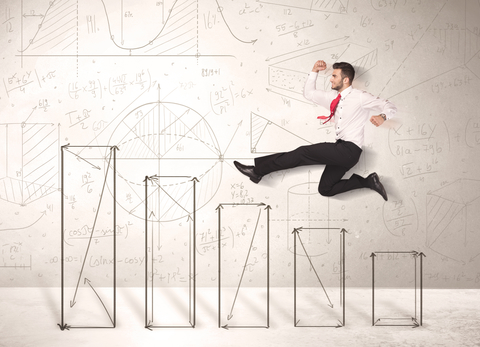 The run chart and the control chart are both highly useful tools in analyzing the performance of a process, and of the organization as a whole. While some managers tend to use them interchangeably and ignore the finer nuances between them, there are actually some significant differences between the two tools that require an educated approach in using them. The good news is that it’s actually not that hard to understand the differences, and doing so can have a great impact on your performance as a leader in your organization later on.

A run chart is quite simple in its design and application, and it allows you to visualize the way a single variable or group of variables changes over time in relation to your operations. There are many applications for a run chart, and it’s one of the most flexible tools available for analyzing trends in data, but its simplicity is often mistaken for a lack of utility.

A good application of a run chart is identifying cycles or other odd variations in a process. Whenever some deviation from the norm occurs, and it can’t be traced to a random factor affecting the process externally, a run chart can give you a good idea of the source of the issue and allow you to localize it very efficiently.

It’s not rare to see run charts used to analyze how the performance of the company has been evolving in relation to the initial expectations about it, and they can indeed visualize this type of relation very effectively. To this end, run charts are also great for showcasing your progress to your customers or someone else who might be interested in finding out where the project currently stands.

A control chart can be seen as an extension of the run chart, and it does indeed have many similar characteristics. However, where a run chart is concerned with showing how a process has been evolving through time with no regard to any target parameters, a control chart can give you a good overview of the current situation while taking some limits into account.

In other words, using a control chart can help you visualize if a process is staying within its reasonable norms. In cases when it doesn’t, the control chart will also show you the exact nature and scale of the deviation, allowing you to take localized action to correct the issue.

A control chart is more useful than a run chart when deviations are important to be accounted for, and when you need to be able to take corrective action as quickly as possible. On the other hand, it can unnecessarily complicate things if that kind of information is not relevant to your current activities. In that case, you should probably use a run chart instead, or at least minimize the number of limits visualized on the control chart.

When to Use Each One

In the end, both types of charts have their own uses, and you’ll find them appropriate in different situations, depending on the way you’re approaching your current problems. It’s a good idea to use a run chart whenever it fits the bill though, as it can often give you a better idea of what the situation is like without adding an unnecessary layer of complication.

Ono the other hand, if limits are important in your operations and in deciding your future course of action, it’s critical to ensure that you’re applying control charts in every situation where they make sense. With time, you’ll develop some intuition for when to use each type of chart, and when to actively avoid one or the other.