Interview with Josh Coates on Mozy and Innovation

Disclaimer: i am not affiliated in any way with mozy, berkeley data systems inc., or josh coates. josh and i met several weeks ago over a plate of exceptional and affordable mexican food at mama chu’s restaurant in provo, utah. i’d describe him a young male, with incredible mental horsepower, unmatched entrepreneural drive, and a nice three’s-company-sized afro. i am a personal user of mozy, but i am not employed by or affiliated with mozy in any way. cheers!

Be sure to read our other interviews in our leadership series.

Please provide a short bio on yourself

Here’s the short version: I started out at UC Berkeley and spent most of my time in graduate research groups working on large scale parallel systems. I spent some time at Microsoft Research in San Francisco, and also worked in the engineering department at Inktomi. Next I founded Scale8, which was a large venture backed storage service provider which handled storage and bandwidth for MSN (music and photos), Viacom (MTV and VH1) and Fujitsu. The technology was great, but we had a lot of challenges on the business and management side. In 2003 we closed shop and sold our intellectual property to Intel. I moved on to work at the Internet Archive for about a year where my primary job was to build out their new petabyte data center in San Francisco. I learned more about glycol cooling and 3-phase power than I really wanted to know — but it was a great experience working with Brewster Kahle and the archive. They are doing important and amazing work there. In 2004 I moved to Utah and started Berkeley Data Systems.

What is the business problem or opportunity that mozy is addressing?

It’s pretty straight forward: disk failure, hardware thefts, accidents, disasters – they all happen. Everyone needs a backup strategy. The problem is that backup can be expensive, and a big hassle. It seems like the obvious solution is an automated remote backup system. It’s always been amazing to me that no one has solved this problem. Sure, remote backup solutions have been around for years, but they are amazingly expensive and the software quality is lacking. The trick is this: can you make it free and keep it simple, yet powerful enough to handle the ‘hard part’ of automated remote backup? Developing excellent software is always a challenge, but on the back end, how do you safely store millions of users’ data? If you do the simple math, you come up with petabytes, and that’s when things get interesting.

Cool. that sounds like arrington’s description of companies he’d like to profile, but don’t currently exist. zawodny also describes a need for this kind of service.  Scoble talks about the need for data storage here also. it seems like everybody is hoping for technology like you’ve described. does this technology exist now and…in mozy? how does mozy address this opportunity?

Yes & Yes. We just decided to develop the highest quality remote backup software in the world, and then give it away for free.

How much is it again?

How does mozy make money?

Two ways: a weekly sponsored newsletter (which, since we’re in beta, we are self-sponsoring them) and the second way is through premium accounts. A premium Mozy account gets you more storage, and is exceptionally inexpensive. Of course, the reason our economics are so dramatically different from traditional remote backup companies is because of our technology. We’ve developed something we call “Distributed Reed-Solomon encoding” or DRS for short. It’s about 8 orders of magnitude (that’s not 8x, that’s 8 orders of magnitude, which is 100 million times) more reliable than traditional RAID5.

This level of reliability is critical if you are storing data on thousands of disks. But what’s really innovative about it is that we can manage the system with just a small dedicated team rather than a huge administrative staff. We’re also just now wrapping up the development of another breakthrough — but I’ll save that for another time. 😉 All of these innovations are really just a lot of hard math and statistical analysis — but it’s pretty incredible what it can do when applied.

Let me make one thing clear: remote backup is not the same thing as an online hard drive. There are plenty of online hard drive services on the web — they are relatively easy to implement and they have marginal value. Don’t get me wrong, I think the “internet storage” concept is fine if you want to manually upload a set of static files that you want to access on the road or to share your mp3s with friends. But it’s not like it’s going to save your can when you leave your laptop in a taxi in Boston, when your house burns down, or when you are trying to actually run a business. It’s just a different problem we’re trying to solve for people.

Berkeley Data Systems is focused on free, secure, automatic remote backup. That’s a narrow, but critical focus and I think that’s the most important difference. As far as S3 goes, I think Amazon’s announcement has caused a lot of grief and anxiety for some of the folks in the online hard drive space. S3 is a great concept, and I think it’ll do great and with an 800lb gorilla like Amazon behind it, it’ll really change online storage. Kudos to Amazon – but fundamentally, it’s just another online hard drive with an aggressive pricing model, and doesn’t have a lot to do with solving the hard problem of remote backup. I think for now, we’ll keep focused and let the online hard drive crowd fight it out amongst themselves.

The difference is that remote backup is automated, encrypted, and incremental. And frankly, it’s very hard to get all the features right: encryption, locked files, block-level incrementals, automation, error detection, single instance storage, and simplifying a complex problem into a simple user interface. You see a zillion little online storage companies, but very few innovative remote backup startups, because it’s really hard to make major breakthroughs in this area. It’s been a lot of fun to finally break some of these barriers with Mozy.

In arrington’s post in january, he lumped mozy with the other online storage companies. your answer to my previous question shows that his characterization of mozy is incorrect. moreover, — the comparison grid that was part of that review — didn’t look to me like he or his assistant really looked at mozy. we, at shmula, went ahead and investigated mozy’s feature set. below is what we found: 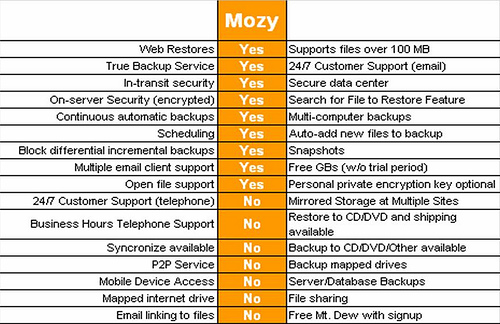 arrington has done other profiles on storage companies and seems to really like Omnidrive and has done not one, but two posts on it. incidentally, the founder of omnidrive is also his cohost on TalkCrunch. i wonder how a side-by-side comparison of Omnidrive versus Mozy would look like? arrington did say he’d like to feature mozy again. i’d bet the ($1.34/week) i make on adsense revenue that mozy would come out on top.disclaimer:i don’t know jack about omnidrive and have not used their service. in fact, i had never heard of them or been to their website until this week. in truth, i don’t know which is better — omnidrive or mozy — and, it wouldn’t be a fair comparison: one is an online hard drive, the other is remote backup. there’s a difference.

On to a really important question — mt. dew or mt. Kilimanjaro?

We’ve recently conducted extensive double blind taste tests here at Mozy, and it turns out that caffeine free mountain dew actually tastes more like it has caffeine in it than the regular mountain dew. Go figure.

Can you share with us rough numbers of current free subscribers or % growth over the life of mozy?

I’ll play coy on the user/growth numbers (it’s LOTS and FAST) but I will tell you that we have over 40 million encrypted files on our servers, and by the time you read this, it’ll likely be a few million more than that.

Argh. I have to restrain myself here – we’ve got some very, very cool stuff coming out Real Soon Now – we’re in a constant state of improvement and innovation. But in the meantime, go download the Mozy client and wrap your data in the warm blanket of free, automatic, secure goodness.

If you are reading this, and you don’t have a remote automated backup solution, then get one. If you win the “hard drive crash” lottery (unfortunately the odds are surprisingly good) then it will really mess your day up. You don’t have to pay $20 per month, or buy an external drive or perform the nightly CD burning ritual heck, you don’t even have to floss your teeth if you don’t want to. It’s simple – if you are running Windows XP, then give Mozy a try. If you don’t mind one newsletter a week emailed to you, then it’s free, otherwise it’s really inexpensive ($1.67 per month). If you’re running linux, just run a cron job of rsync, gzip and mcrypt piped over ssh to your friends server over their DSL line. (Yes, we plan on a linux client eventually but in the meantime..) If you are running a Mac then wait a few months for the Mac version of Mozy to come out. Anyway, just play it safe — there isn’t a good reason not too. Data loss is now optional. 😉