Jiffy Lube Waiting Room and the Role of the Bay Window

Earlier this week, I went to Jiffy Lube to get my oil change. I once worked for a person responsible for the redesign of many waiting rooms in various industries, so I went with an observant eye, looking for the items that he taught me about in his ethnographic work.   It was a very interesting 30 minutes, free of multitasking. Here’s what I saw and learned.

This person taught me a few things about observational research:

The waiting room was rectangular shaped, with 8 chairs.  There was a large bay window on one end of the room and four chairs on the other end of the room.  The first thing I noticed was that those four chairs with direct view into the car bay were filled and the lone chair, facing away from the window was empty.  Here’s my first observation:

Observation 1: Those four chairs, with direct view into the car bay (where the cars are being worked) were filled because customers want to see their cars being worked-on.

The car mechanic at the car register came to me several times during the 30 minutes I was there — probably 2 times — to give me an update.  It was just an oil change, but he tried to up-sell me on other stuff, which didn’t work.  Still, he gave me frequent updates, more than I expected.  Here’s my second observation:

Observation 2: We know from our knowledge of the Psychology of Queueing that Uncertain Waits Feel Longer than Known, Finite Waits.

Giving me updates reduced my perception of waiting time.  This is good, qualitative business practice in any waiting situation.

There was a TV and plenty of magazines available.  Here’s my third observation:

In other words, if a customer is waiting and doing nothing, it feels longer.  A simple magazine or a TV show can help time feel as if it is going faster.

What A Customer Wants

Regarding Observation 1, Jiffy Lube failed to remember why they redesigned the waiting room in this way.  See below: 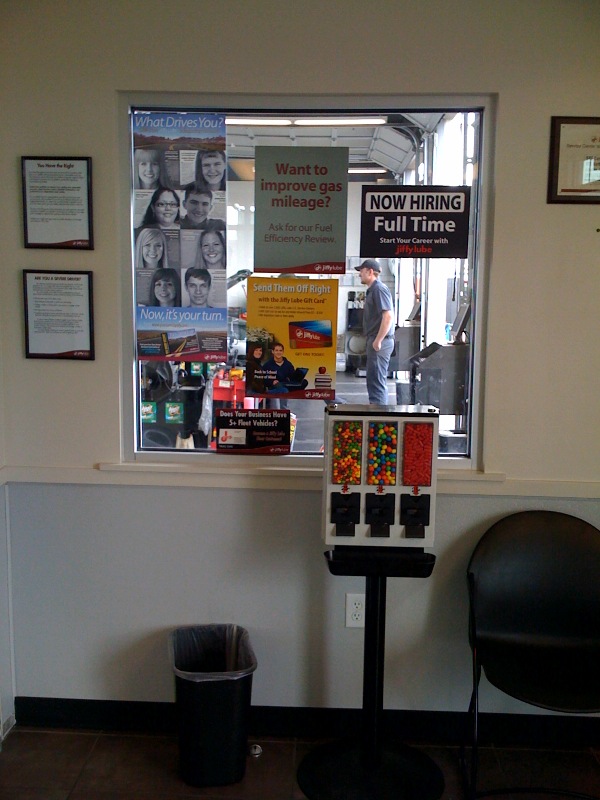 The Customer wants direct, clear view into the bay and to their vehicle — the car is the Center Stage.  Yet, Jiffy Lube littered the window with stuff, propaganda, and ads.  The candy machine is a smart move — some added revenue for the company in a spot where they knew people would be frequently pacing.  But, by covering the window ruins the the main anchor and purpose of the waiting room — to ease the anxiety and impatience of the customer by providing a direct view into the very purpose of their being there.

In the words of my former manager and mentor who redesigned waiting areas for many different companies:

The car repair story is real – I once spent a week watching people nod off waiting for their cars to be repaired. I was Jane Goodall and they were the chimps. And I got more and more panicky as I saw less and less “happening.” Then I started thinking about the obvious things I could see. One seat in the waiting room actually had a pretty good view of the car repair bays, and two or three had decent views. None of the others really let you see your car at all. Luckily, I had detailed notes: I knew where people had sat and how long they sat in each seat.

As I reconstructed scenes, it became more and more clear that people tended to sit in one of the “good” seats unless they were occupied or someone was sitting in the next seat and there were a lot of other empty seats available. When the waiting room was empty, I looked carefully at the carpet and the upholstery of the “good” seats and, sure enough, the wear patterns showed that what I had seen that week had been going on for a long time. There really were good seats and bad seats and you could tell which was which by checking out the sight lines.

Since the project was about developing criteria for understanding waiting-area designs, this was an important piece of information. A good design would put the car center stage and use the fact that customers were riveted to that stage as a way to organize the space and its communication elements. The path for the rest of the analysis was pretty clear.

A reminder for those of us responsible for products or services, where waiting might be an element of the experience:

Please visit this page, for more on Queueing Theory.

Design Thinking doesn’t mean just aesthetics, but it is a blending of many disciplines to solve for the customer.  In this example, we see Queuing Theory, Layout Design, Observational Psychology, and Lean Thinking working in concert, solving for a customer need.