In keeping with our series of honoring those that came before us and,  on which shoulders we stand, today we’ll revisit the life of Sakichi Toyoda, the founder of the eventual Toyota Motor Corporation.

We are indebted to Sakichi Toyoda primarily for his invention of the Toyota Automatic Loom and, specifically, one piece that, at the time, was ingenious.

When the needle broke, the machine stopped.

Sakichi Toyoda created an innovation that would later become one of the pillars in the Toyota Production System (Lean). That pillar we now call Jidoka, sometimes called smart automation with a human touch or autonomation. Andon is also another way we see Jidoka manifested in real work.

Sakichi Toyoda’s contribution to the Toyota History is undisputed. Below is his history.

The information below is from the Toyota Boshuku website (http://www.toyota-boshoku.co.jp).

Sakichi Toyoda was born on February 14, 1867, in the village of Yamaguchi (now part of the city of Kosai), in Shizuoka Prefecture. An independent, free-spirited youth, Sakichi did not take to the family businesses of farming and carpentry.

In the spring of his twentieth year, Sakichi made the huge decision to leave the familiarity of his village and travel to Tokyo. There, Sakichi saw modern factories and the latest machinery. These fascinated Sakichi, and awoke in him a passion for machines and motors. Returning to his village, Sakichi began to conduct his own research, starting with the familiar objects around him. He devoted himself to improving the hand loom, which at the time was a clumsy and inconvenient device.

In 1890, Sakichi completed his first invention: the Toyota Wooden Hand Loom. Although he found buyers for the cloth woven by his looms, he sold almost none of the looms themselves. Sakichi next turned his attention to researching a power loom, and in November 1896 he invented the Toyoda Power Loom. This steam-driven loom, made of a combination of wood and iron, was Japan’s first power loom. The Toyoda Power Loom was the first step toward the full-scale development of power looms.

Sakichi’s looms won great acclaim, and he continued to invent new automated-loom technologies amidst repeated partnerships and breakups between companies like Mitsui & Co. and the textile industry. The economic crash caused by the Russo-Japanese War, however, struck a hard blow to the textile industry, and Sakichi was forced to give up his research and development efforts. In 1910, Sakichi quit his job at Toyoda Loom Works Ltd. and traveled to the USA and Europe to observe the loom industry there.

Seeing the well equipped laboratories there steeled Sakichi’s resolve, and the following year he completed Toyoda Automatic Loom Works, with 200 looms. He left the management of the company to his family, however, while he dedicated himself to the research and development of automated looms.

Almost immediately, Sakichi ran into a new problem: thread. If the quality of the thread is not reliable, then if the thread breaks, it is not possible to tell whether the fault lies with the loom or the thread. Sakichi thus decided to operate his own spinning mill, in order to ensure that he had a supply of higher-quality thread.

When World War I broke out in 1914, Japan’s industry was boosted by the wartime economy, and Toyoda Automatic Loom Works grew too large for one person to manage. On January 30, 1918, Sakichi incorporated his company, forming Toyoda Boshoku Corporation.

Although Toyota traces its roots back to Toyoda Boshoku, Sakichi’s death put the company’s continued existence in grave doubt. Under the wartime command economy, private companies were consolidated. Toyoda Boshoku was merged with an affiliate to form Chuo Spinning Company. Unable, however, to meet the demands of a final restructuring plan, it was then merged with Toyota Motor Co., Ltd. (now the Toyota Motor Corporation) — a former spin-off of Toyoda Automatic Loom Works (now Toyota Industries Corporation) — and spinning and weaving operations were suspended. 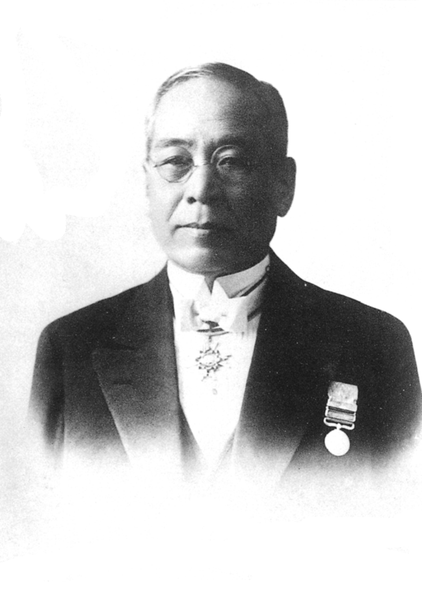 After war’s end in August 1945, the former employees of Toyoda Boshoku began working to resume spinning and weaving operations. After protracted negotiations with the central authorities, they were granted permission to restore the weaving and spinning works — albeit with some restrictions — and immediately formed a weaving and spinning department within the company. During the war, the government had requisitioned the majority of the spinning machines for scrap metal, but the employees repaired the remaining machines, and on May 15, 1950, Minsei Spinning Co., Ltd. was spun off from Toyota, making the company independent once more. The word “minsei” is Japanese for “private sector”; Risaburo Toyoda so named the company to avoid the dismantling of Japan’s old zaibatsu system, being carried out by the Allied Forces in order to privatize the economy.

The textile industry had prospered under Japan’s wartime “special procurement” boom, but after the boom ended the industry fell on hard times. In order to weather the downturn in the cotton trade, Minsei Spinning tried diversifying, first to wool and woolen goods, then to synthetics, and finally to non-fibers, but it continued to struggle to extract itself from this protracted difficult period.

Ishida was appointed as chairman in June 1967, at the company’s 34th general shareholders’ meeting. At this meeting, he changed the name from Minsei Spinning to Toyoda Boshoku. Bound up in this name change was Ishida’s desire to carry on the heritage of the name given the company by Sakichi Toyoda, and give the company a prominent place on the world stage as part of the Toyota Group.

As the restructuring of the company proceeded apace, Japan was at the height of the Izanagi boom (a period of prosperity and economic development in the late 1960s). Seeing this as the perfect opportunity, Toyoda Boshoku focused on moving away from its traditional market-driven thread sales, and developing products that could ensure stable revenues not affected by the whims of the market. The company began full-scale production of pure-cotton knit combers (snipes), and luxury combers made from Egyptian cotton and targeting high-end customers. Recognizing the opportunities in industrial materials, the company also began producing fabrics for automobiles, and began supplying base material for car seats to Toyota.

In the early 1970s, Japan was hit by what it called the “Nixon Shock”: the rapid increase in exports from developing countries, coupled with a temporary halt on conversion between gold and the dollar by the US. The Nixon Shock pushed not just the textile industry but the entire Japanese economy into a severe recession. Toyoda Boshoku took drastic measures to stop the flow of red ink from its chronically unprofitable weaving division, stopping all in-house production; in 1973, it began production of automotive ignition coils, which had been transferred to it by Toyota and Nippondenso (now Denso). 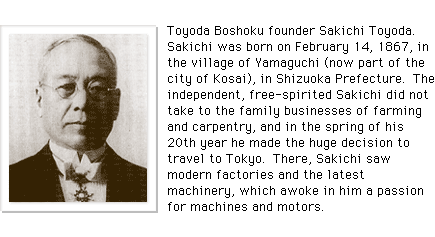 This was the company’s first step toward the production of automotive components. The location was the company’s Kariya Plant. Employees were sent to Denso’s Anjo Works to learn the necessary skills.
Subsequently, the unique textile technologies that Toyoda Boshoku had cultivated were applied to automotive seat fabric. After strict testing for elasticity, contraction, and other features, the fabric was officially selected for use in the Celica and Sprinter. Toyoda Boshoku began delivering fabric to Arakawa Auto Body, Takashimaya Nippatsu Industries, and other seat manufacturers. The company had hit its stride in the production and sales of seat fabric, and its development expertise enabled it to diversify into the car interior field, including carpets and seatbelts.