What Is A Standardized Work Chart?

Home » Lean Manufacturing » What Is A Standardized Work Chart? 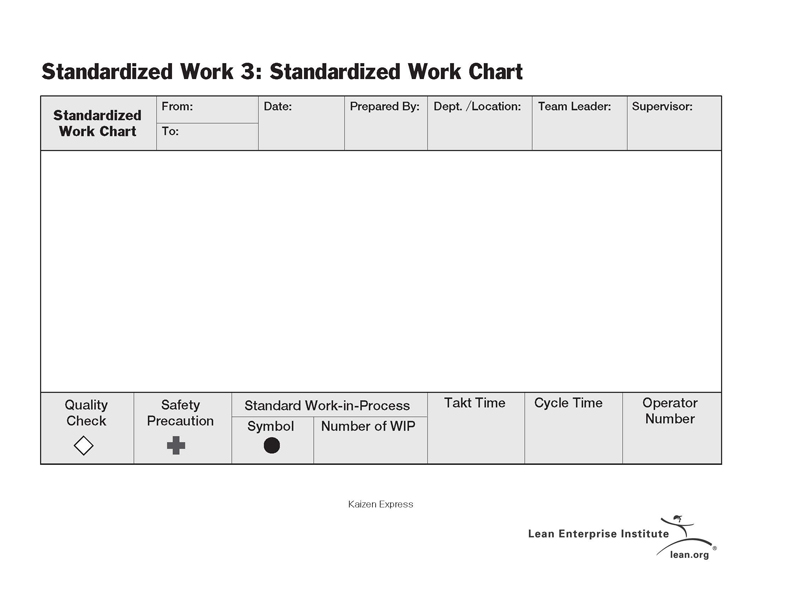 The Standardized Work Chart is where things get interesting for many leaders, as this is the part which actually allows you to unleash your creativity to some degree. This sheet is less about measuring times and distances, and more about getting a purely logical overview of the process involved in your day-to-day operations.

That’s why the Standardized Work Chart relies on drawings and sketches unlike the others, and it’s important to have a good sense for visual representation if you want to make those charts good. Note that you don’t need to be any good at drawing the important thing is that the chart clearly demonstrates where each piece of the puzzle is, and how they all relate to each other.

For example, you can sketch out a certain floor of the production facility, marking each machine and part involved in the process, and dotting down the paths the workers have to take to complete every task.

Sometimes, problems in this aspect of the organization aren’t that apparent to those on the ground floor, but a good bird’s eye view can give you all the information you might be missing. Sooner or later, you’re inevitably going to notice certain patterns in the way those operations are completed, and with some rearrangement of the plans, you could easily come up with a new system that works much better than the old one.

Using a computer can be helpful in drawing up the chart, if you can see yourself making a large number of changes. However, this is a controversial view that’s not shared by everyone some have the opinion that this is actually a setback for your creativity. According to that school of thought, using plain old pen and paper forces you to think much more carefully about each change you’re making, because you’ll subconsciously trying to avoid repeating your work as much as possible.

But in the end, it’s up to you which method you’re going to choose the important thing is that you work with a system that you’re personally comfortable with. The charts can be a bit difficult to get started with, because unlike the other charts, you’re literally starting with an almost blank page here. There’s a lot of room for creativity, but that’s actually a limiting factor in the eyes of some people, rather than a freeing one.

Ask for input as much as you can! This is easily one of the best pieces of advice you can get with regards to working on a Standardized Work Chart, precisely due to the creative element involved in drawing it up. You may sometimes not notice certain errors in your way of thinking, things that will be much more obvious to someone completely detached from your current problem.

Don’t be afraid to use things like color coding and more unique types of graphical representation, if you feel like they can help the intuitiveness of the charts you’re producing. As we said above, what really matters here is that the person filling out the chart is comfortable with it.

This is also the least rigid type of chart of all three, meaning that it’s very easy to implement changes in the way it’s drawn up, without deviating from the core concepts of standard work. Your organization will likely have some unique points about its style of work that would require a different approach to drawing up the Standard Work Chart, and it’s your job as the leader to ensure that the chart is in line with the overall work of the company.

As long as you implement this chart properly and keep it regularly updated with your changes, you should start seeing results very quickly after the first few iterations. People will likely feel motivated to join you as well, once they’ve seen exactly how the chart works. And with enough time, you’ll get plenty of feedback from your colleagues about possible improvements that can be implemented in the chart. Combining what you’ve learned here with the conclusions you’ve drawn from the previous two types of charts should lead you to some interesting discoveries.