The Toyota Mindset Book Review and Thoughts on Taiichi Ohno

Enna Publishing was kind enough to send me several complimentary books with no obligation to read or to keep them. Every once in a while, I’ll receive a book that I’m excited about reading. The Toyota Mindset is one of those.

The Toyota Mindset was written by Yoshihito Wakamatsu who worked directly under Taiichi Ohno. The contents of this book is a documentation of his interactions with Taiichi Ohno – what he said, how he said it, and the “why” behind many of the well-known methods in the Toyota Production System.

His book is organized into 10 chapters, each of which he calls “Commandments”, claiming that Taiichi Ohno lived by 10 main ideas and makes a caveat that the word “commandment” are the author’s, not Taiichi Ohno’s.

Below are the 10 main ideas Wakamatsu claims Taiichi Ohno lived by:

The book is available on Amazon and the retail price is $34.99 and is currently in stock. 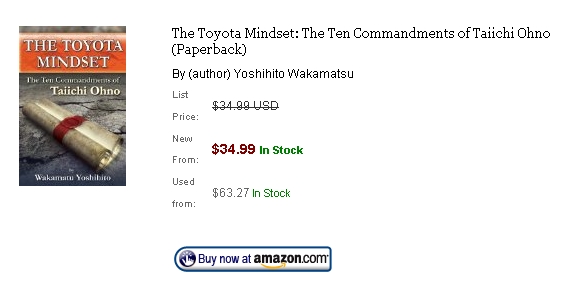