Ever since I discovered Twitter, I’ve been amazed at @ev, @biz, and @jack’s idea of simplicity and usefulness.  Lately, @windley (Phil Windley’s article), @monkchips, and JP have approached Twitter from a more theoretical perspective.  This article is my contribution to that healthy conversation (this blog post will be followed by a short tweet, of course).

If I’ve been charitable in my understanding and summary of James’ definition of Asymmetric Follow, then his explanation and definition makes sense to me.  From my experience as a former High School student of the less-popular type, that’s how life was.

But, let’s quantify what James is talking about.  In fact, when we do, we’ll find out that it’s actually basic combinatorics.

To demonstrate this, we use basic statistics of the form n-choose-r, where !, such as n!, is equivalent to n factorial, to arrive at the formula for how many pairs or permutations we can choose from n items:

For the number of pairs, we can reduce the above formula to the following: 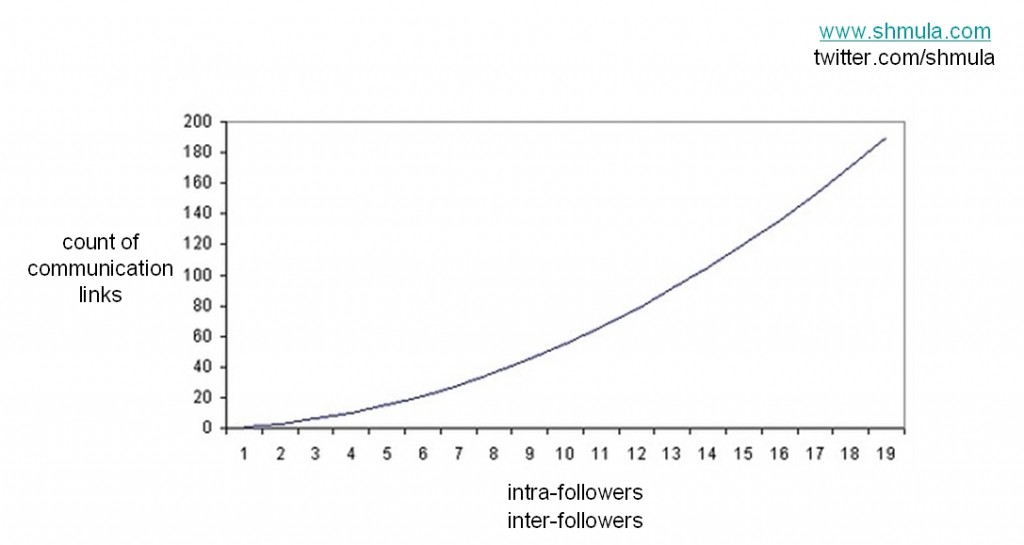 Visually, as inter-followership grows, the communication links grows non-linearly, but quadratically (n! grows exponentially) — in either case, the function is clearly not linear:

JP runs a really fun experiment that validates his hypothesis that tweets in the universe of Twitter are comprehensively exhaustive 3.  What his experiment does not show is the exclusiveness of the tweets — that is, their uniqueness from each other.  On its face, this is not a big deal, but in scientific inquiry, being able to compartmentalize objects in unique buckets is helpful.

One reason it is difficult to classify tweets as mutually exclusive in content is because there are Replies and Retweets.  There is probably an innovative way to find the unique and mutually exclusive clusters in the corpus that is Twitter — that would be fun work for a computational linguist.

For this post, this is not a big deal, but I just make this point for clarity — really great experiment, JP.

Ummm, I don’t really have a conclusion or a point, except for that I think Twitter is pretty amazing and that Twitter can and should encourage computer scientists, computational linguists, behavioral economists, combinatorial mathematicians, set theory geekzoids, game theory freakonomica, cultural anthropologists, and others to participate in and learn from this massively human experiment.