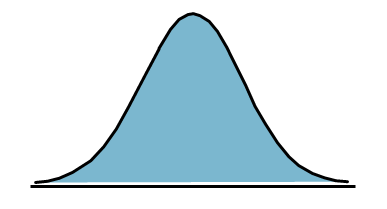 The Normal Distribution has these 3 unique characteristics:

The obvious conclusion from items 1-3 is that if the data is not normally distributed, then the following are likely true:

Most Used and Abused Distribution

Notice how they are different?

Why be Normal?
Why do we want to do this? By doing this it allows us to use the Z Table, which helps us to be able to compare various normal distributions and lets us estimate tail area proportions. This act of converting our data to the Standard normal is called “Normalizing”.

By Normalizing our data, we convert the raw score into the standard Z Scores with a Mean = 0 and a Standard Deviation = 1. This allows us to use the Z Table to make estimates.

Area Under the Curve and Process Capability

I understand that this material is getting a little academic. I want you to keep the end in mind: this information will help us later on determine process capability, a key measure in Six Sigma. More on that later.

Extending what we now know about the area under the curve, we can predict more accurately our estimates of processes are performing. This curve will be familiar to you – it’s the foundation of Six Sigma. 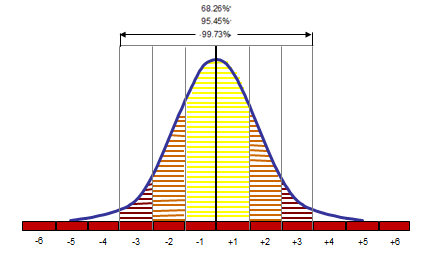 Based on this data and what we know about the area under the curve, we can make the following conclusions:

This means that, regardless of the shape of the distribution in our data set, when we get beyond 3 standard deviations from the mean, the probability of occurrence will be very low.

Below are several distributions you might encounter in your DMAIC project work: 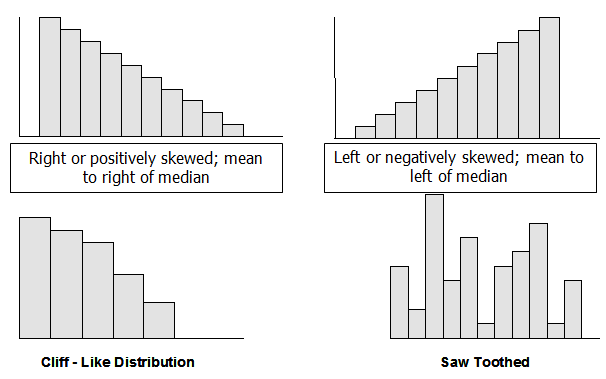 The Binomial Distribution is used to model discrete data and applies when the population is large (where N is greater than 50) and the sample size is small compared to the population.

Use the Binomial Distribution when the proportion of defects is equal to or greater than 0.1 (this means it’s really small).

From experience, the Poisson Distribution is a common distribution in waiting lines, call centers, and in many transactional processes. Don’t be surprised if you see it in trying to approximate data from those areas.

The Poisson Distribution can be used to model discrete data.

The Chi Square is common (from my experience) in healthcare processes and in areas where discrete data is found such as Go/No Go, Present/Not Present, etc.

In our next module, we’ll treat different data distributions and learn various ways we can visualize the data using graphical methods.