The Roles of Different Belt Colors in Six Sigma 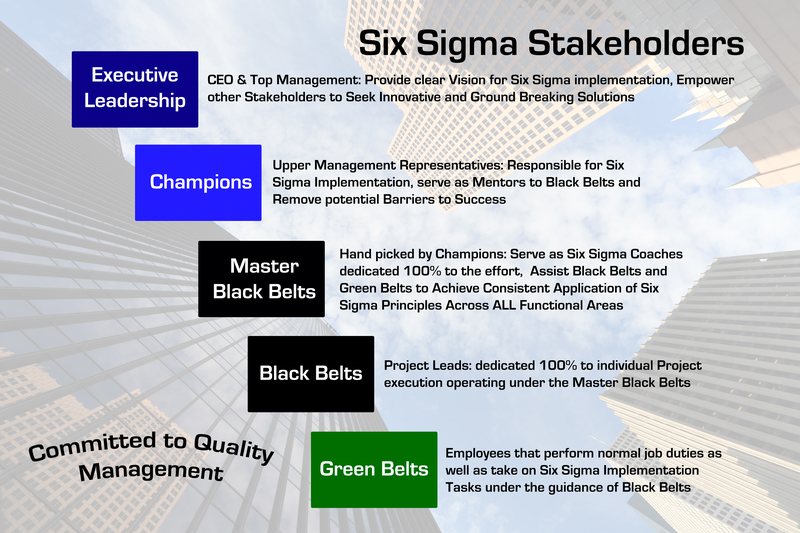 The Roles of Different Belt Colors in Six Sigma

Six Sigma is a complex process improvement methodology developed by Motorola. Due to its complexity, it requires the presence and participation of certified professionals for it to be implemented properly and successfully. Similar to martial arts, Six Sigma employs different belt colors to signify different levels of certification and experience. The belts also signify what kind of roles in the Six Sigma implementation the individuals holding are qualified to fill.

There are three main belt colors:

Additionally, it’s very common to also have Master Black Belt with some additional variations and colors also being used to a varying extent.

Certified Six Sigma Black Belts are professionals who are qualified to lead Six Sigma improvement projects usually in a full-time capacity. They have a thorough understating of the methodology, and the necessary skills and experience to implement the DMAIC process improvement strategy with all its steps. Black Belts need to be well versed in both the underlying philosophy and principles of Six Sigma, and all of its statistical tools and support systems. A proper Six Sigma implementation is not possible without the presence of a certified Black Belt. Black Belts teach classes, work with management on the deployment strategy, and help Green Belts complete their projects.

Certified Six Sigma Green Belts are also professionals who fully understand the Six Sigma methodology and all of its methods and principles, but unlike Black Belts, are not full-time change agents in their organizations (part-time). Most managers (champions) in a Six Sigma organization tend to be Green Belts, because they have other responsibilities besides improvement projects, but their understanding of the methodology still needs to be thorough. The main difference lies in the time they devote to it. Green Belts are usually team members in larger projects led by Black Belts, but can also lead projects of their own if the size of the particular project does not require full-time involvement, or the expected completion time frame is allowed to exceed 6 months or more.

Certified Six Sigma Yellow Belts are not expected to have the same depth of knowledge about the Six Sigma methodology as Black and Green Belts, but they still have a certain level of familiarity and understanding of all Six Sigma concepts. Yellow Belts are always part-time participants who understand the basics of the methodology, and can serve as team members on improvement projects, but aren’t experienced enough to lead significant projects of their own.

Certified Six Sigma Master Black Belts are highly trained Six Sigma professionals whose main job is to coach Black Belts and Green Belts. A Master Black Belt is highly experienced in applying the Six Sigma methodology, and has an absolutely thorough understanding of the methodology as the whole, and how to implement it at a scale that goes beyond a single improvement project. Master Black Belts are Six Sigma leaders that devote all their time to overseeing all the Six Sigma projects, ensuring consistency and direction. Additionally, their in-depth understating of the statistical tools used by the methodology might have them devote time to crucial statistical analysis as well. They have to carry out two distinct and different skills: providing strong technical and statistical knowledge, and coaching and mentoring executive leadership.

The Importance of Certification

The Six Sigma methodology has strict certification standards, which mean that certified professional with specific belts colors are the only ones that should perform important improvement projects. This means that when organizations implement Six Sigma, they can produce reliable results and consistency can be maintained at a very high level. Additionally, this makes Six Sigma experience transferable between organizations of different kinds. Unfortunately, this can also be a negative with Six Sigma, as it takes a while to develop enough Black and Green Belts in the company to spread throughout the company. Often times, external consultants are used to bridge the short term gap.

Are you interested in increasing your salary with a Six Sigma certification, and helping your company improve? Check out upcoming classes in your area through 6sigma.US >>>