[VIDEO] How Do They Make Tofurky Roast?

Home » General » [VIDEO] How Do They Make Tofurky Roast? 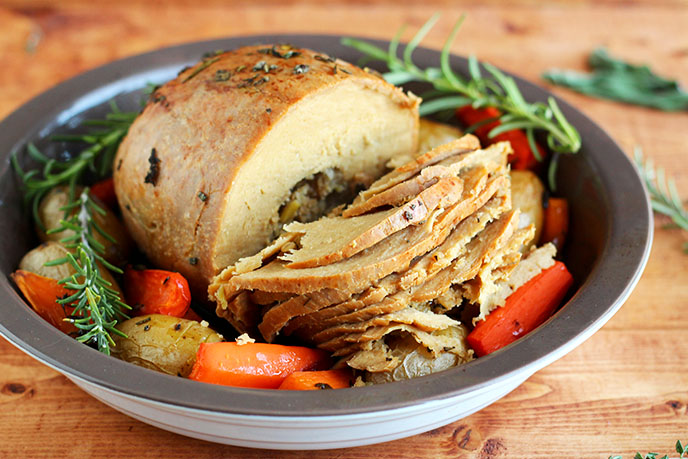 Tofurky is the brand name of an American vegetarian turkey replacement (also known as a meat analogue, or, more specifically, tofurkey) made from a blend of wheat protein and organic tofu. The name Tofurky is a trademark of Turtle Island Foods, a company based in Oregon. Turtle Island has come to also use the brand name for most of its meatless products, such as deli slices, sausages, jerky, tempeh (its first product), burgers, and franks.

The Magic of Tofurky Roast

Located in Hood River, Oregon, Turtle Island Foods began in 1980 with intentions to create delicious, nutritious, convenient and affordable vegetarian food. The company was founded by Seth Tibbott. Seth began by producing tempeh for friends and family. With their help, he expanded his company to what is now the second largest tempeh producer in the United States. The famous Tofurky was developed in 1995. In 2008, Turtle Island became a sponsor of The Humane Society, the first food processor to do so in the society’s history. In 2011, the company announced plans to build a new plant in Hood River at a cost of $10 million, with a goal to achieve a LEED platinum certification on the building. The new 33,000-square-foot plant opened in October 2012.