My approach to applying Lean in an operation is a little unorthodox. Most practitioners follow the value stream mapping approach, where product families are created and each product family is essentially a value stream. Here are the steps of this typical approach:

This is the typical approach advocated by many. The term “value stream map” was coined by John Shook in his book Learning to See. It’s a great book and helps to elucidate simple yet powerful approaches that have been practiced inside Toyota for generations. But, for all the good that book has accomplished, there’s some negative outcomes too.

Focusing on value stream mapping is heralding a tool to be much greater than it really is.

You see at Toyota where I learned Lean, there is no value stream mapping. At least not as it’s understood in the “lean subculture” – what I call the Oprah-ization of Lean. At Toyota, the formal method is called information and material flow mapping. It’s actually a very specific approach to a very specific problem.

But, for some reason, value stream mapping has become the de-facto approach to implement lean. I think that’s misguided at most.

The so-called “lean consultants” love this approach because it’s package-able and very routine.

But that’s the problem: neatly packaging Lean in this way has created droves of what Ohno called “Catalog Engineers“. 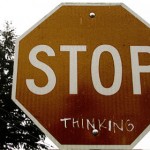 There’s a story regarding a conversation between Taiichi Ohno and an engineer named Mr. L. In this story, Ohno tells Mr. L that a particular process needs to be fixed. Mr. L asked Ohno for some advice on how to fix the problem. Diligently, Mr. L did exactly what Ohno told him.

But. It doesn’t end there.

To his surprise, Ohno was upset with Mr. L. According to the story, Ohno says,

Why did you do only what I had told you to do?

Ohno then continues with the story and called workers like Mr. L “catalog engineers” because they only do what they are taught and have – effectively – stopped thinking for themselves. The story goes that Ohno vehemently taught against being a catalog engineer.

I understand that those reading this article will probably call me out, curse at me, unfriend me on Facebook, unfollow me on Twitter, and kick me where it counts if given the chance.

Those that approach every problem using the value stream mapping approach is bordering on being a catalog engineer.

Sure, the approach works sometimes.

But, are information and material flow diagrams created for every. single. problem. at Toyota?

Because not every problem merits one.

My Invitation To You

Look at how you are approaching Lean and how you apply it in your world. Is there room for ingenuity? Innovation? Creativity? I challenge you to go against the norm – and actually apply practical lean – not the rote, prescribed, approach that is often talked about in Lean Pop Culture.