Interview with Matthew May on Elegance, Subtraction, and Lean

Home » Lean Manufacturing » Interview with Matthew May on Elegance, Subtraction, and Lean

I had the wonderful opportunity to interview a good friend, Matthew May. You can learn more about Matt’s background after the interview but let me say this: Matt is world-renown business consultant and very respected voice in Lean and in Design Thinking. He has published 4 books and is a regular writer for the Harvard Business Review Blog. Matt refuses to be boxed anywhere, but probably the most convenient category in which he finds himself is the overlay of Elegance, Subtraction, Innovation, Leadership, and Lean.

In this interview, you’ll learn the following:

Enjoy the interview below and be sure to read our other Lean Leadership Interviews.

Thanks for joining us Matt. Can you please introduce yourself and your work to my readers?

My pleasure, thank you. In a nutshell, I’m an independent business advisor specializing in strategy, culture, and innovation. My philosophy revolves around the concept of elegance, which I define simply as the ability to achieve the maximum effect through minimum means. I’ve written a few books and articles on the topic, and given more than a few talks. All of my work comes from this generative theme, whether it’s facilitating a strategic conversation or teaching a creative methodology.

Matt, can you share with the audience how you got started on your Lean journey? Was there a specific event that sparked your interest and lifelong journey in Lean?

I was introduced to lean concepts through my work with the U.S. headquarters of Toyota Motor Sales, specifically the University of Toyota. My very first project, which turned out to be a nearly decade-long experience, was to somehow make the principles and practices of the Toyota Production System meaningful for the knowledge side of the business. They were not embraced at that time (late 1990s) anywhere other than in manufacturing and warehouse operations. Previous attempts had failed miserably. They had a training course called, I think, “TPS for Office.” I’m pretty sure I still have the training deck, complete with the most hideous clipart and animations you’ve even seen. The net impact was a few people organizing supply cabinets.

You’re a bit of an anomaly in the Lean world because you’re recognized for your work at the University of Toyota, but you are also known for your expertise in innovation and design thinking. If you were to place yourself in a convenient category – in which box would you place yourself?

You’re being nice. Let’s face it, I’m odd man out when it comes to the way most people view lean principles. That probably comes from me witnessing the dead-on-arrival reaction to TPS inside the Toyota organization itself. As a matter of fact, one of my most vivid memories is that of 2001, the year a green booklet called “The Toyota Way 2001” arrived in Torrance, California, home of Toyota Motor Sales. The executive committee effectively told the Toyota mother ship in Japan: “This is all well and good for Japan, and the factories, but with all due respect, it has no place in our operation.”

I was lucky to partner with the dean of the University of Toyota, a very smart guy who saw through all the jargon associated with TPS and lean, and focused on the one thing Toyota is really good at: learning.

SO…my box is learnership. Maybe that will be the title of my next book!

I must tell you that of all the books and articles written about lean and Toyota, the one that comes closest, in fact captures, the way we eventually taught and practiced lean principles on the knowledge side of the world, is The Lean Startup, by Eric Ries. While his lens is that of tech startup, that book is all about validated learning, through the scientific method. That is what we focused on at University of Toyota.

That was a softball question. Now let me ask a real one: Can you explain what exactly is the intersection of Lean and Design Thinking?

It’s more like an overlay than an intersection. Listen, Lean and Design Thinking are simply convenient handles for what is essentially the same problem-solving process. The words are different, but the melody is the same. The instruments used to produce the melody are different. That’s important, because while a melody is memorable, you’re far more likely to keep humming it if you know and like the words, as well as arrangement and instrumentation. How many international songs without English lyrics played on a harp do you know?

One reason I like design thinking is that the words and music just resonate more with most people. You’re at a bar with a friend talking about your day, and you tell them you were doing process improvement. Yawn. You tell them you redesigned the way something works, they lean in. When I teach design thinking, I teach it the way I learned at Stanford’s d school…we redesign a existing item. It’s still the core item when all is said and done, incrementally improved. That’s called kaizen. So it’s all the same!

Look, you cannot argue with science: there are two, and only two, ways that human beings solve problems: consciously and sub- or unconsciously. Daniel Kahneman calls it fast and slow thinking. One way involves a disciplined, phase-driven approach in which we observe something that piques our interest, raise a question about it, hypothesize an answer, and test our guess, then adjusting things based on how well they worked. A child in a high chair does this naturally. The other way is through a sudden creative insight, which often occurs as the Eureka moment of legend after we’ve steeped ourselves in the problem, tried everything and nothing worked. We take a break of however long and do something mundane and routine. Suddenly the answer pops into our brains.

That’s it, end of story. Everything else is marketing.

Tell us about EDIT Innovation 1.

EDIT is simply the name I conduct business under. There are actually a lot of Matthew May’s out there, so when I left my Toyota partnership in 2006, I wanted a business name. I started with Aevitas Learning. Aevitas is Latin for “lifelong.” But it wasn’t elegant, because no one knew exactly how to pronounce it. So EDIT was the replacement. I chose it for two reasons. First, the word “edit” captures the essence of improvement through subtraction. As Lao Tzu wrote 2500 years ago: “To attain knowledge, add things every day. To attain wisdom, subtract things every day.”

I’m in the wisdom business.

The logo design utilizes the first law of subtraction (what isn’t there can often trump what is) with use of a negative space minus sign to denote the act of editing.

Second, EDIT is an acronym for the central creative process that enables someone to consistently produce innovative, elegant solutions: empathize, define, ideate, test. It is this iterative loop around which lean innovation aka design thinking revolves.

I’m a one-man band, a gun for hire. From time to time when a project requires tangible deliverables I’ll bring together a project team and utilize the Hollywood model of production, in which I’m the executive producer.

What type of challenges might a company be facing for which EDIT Innovation is especially tailored to assist?

The challenges I field go something like this: “Innovating consistently is a struggle for us.” “We have ideas aplenty, we just can’t seem to execute.” “We’re not sure which way to grow.” “We’ve lost our founding entrepreneurial spirit.” “Our operations drain our resources.” “The idea is there, we just need to scale it.”

If you could go back to your time at Toyota for a moment. Are there lessons during your 8 years there that are largely ignored or even unknown to the Lean community?

My bet is that the out-of-school stories I told in question #3 aren’t widely known. But let me reiterate.

The secret to lean has nothing, and I mean nothing, to do with tools, techniques and practices that are taught and followed. At that level, lean is no different than any other programmatic approach.

The secret to lean is the art of addition through subtraction, ala Lao Tzu. I didn’t get that until midway through my tenure. And yes, there was a “moment.” Rather than regurgitate that story, I’d point people toward this little piece I penned for The Sunday New York Times 2

You have accomplished much in your career. What’s the one thing you still lack and are actively working on?

Pure elegance in work and life. I would like my work to be an effortless pull, not an effortful push.

I’ll never achieve, because it’s like perfection…to be pursued, not necessarily achieved. But I’ll probably get to simplicity. And in just the way Vince Lombardi said, and I paraphrase: “If you aim for perfection you will achieve excellence,” I figure if I aim for elegance I’ll achieve simplicity.

Your–and/or your–team’s best thinking. My going-in supposition is that the solution to whatever problem is being tackled lies not in my brain, but in the collective gray matter of those I’m helping. It’s my job, and a job I love, to bring that creativity to light. I have a robust, tried-and-true quiver of tools and techniques to pull out the very best from the team.

So, I’ve never thought of myself as a consultant in the traditional sense of the word. You know, the guys that come in, study a bunch of stuff, write up some near-mindless and always-obvious recommendations that are an inch thin and a mile wide, then walk away. That old school way of consulting is like the walking dead. The big firms can’t do the canned strategy anymore because the world is moving too fast.

Strategy is about choices. And important choices require an effective framework for wrestling complexity to the ground, and an objective third party to facilitate effective progress. That’s me: Coach. Facilitator. Teacher.

Is there anything else you’d like the audience to know?

I want to be Roger Federer in my next life. He’s the epitome of athletic elegance. 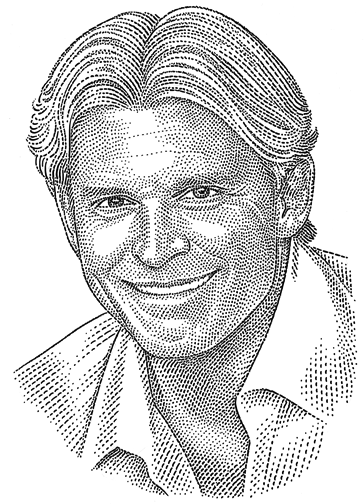 Matthew E. May counsels executives and teams on matters of strategy, culture, and innovation through his firm, EDIT Innovation.

He spent over eight years as a close advisor to Toyota. Matt has written four books on business innovation, his latest being THE LAWS OF SUBTRACTION: 6 Simple Rules for Winning in the Age of Excess Everything (McGraw-Hill, ©2013).

He writes regularly for American Express OPEN Forum, HBR blog network, and University of Toronto’s progressive periodical, The Rotman Magazine. He holds an MBA from The Wharton School and a BA from Johns Hopkins University, but he considers winning the The New Yorker cartoon caption contest as one of his proudest and most creative achievements.

Read our other Lean Leadership Interviews below: