Pareto Analysis Excel Model is Not Difficult – Learn How

As opposed to a Pareto, where the picture of the data shows a nice stratification and separation in the data, a Flateto is exactly the opposite: the visual picture is one where there is no separation — all the bars are of equal length.  Essentially, a Flateto doesn’t tell us where to spend our time or energies.


Below is a good example of a Pareto — the exact opposite of a Flateto: 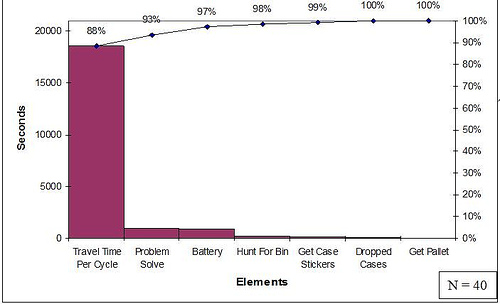 The above picture shows that the majority of the processing time for a process was being spent in travel.

A Flateto, on the other hand, would have showed that processing time are roughly the same across all category types.  Indeed, a Flateto doesn’t tell us much or help us focus on the right things.  Whereas, the Pareto above tells us that if we were to reduce processing time for the process above, then we ought to take a serious look at the travel time category because, most likely, any improvements in that category would yield us and the team bigger results and ensures that we are focusing on the right category.

The Pareto Principle was named after an Italian economist who discovered that 80% of the wealth in Europe was concentrated in 20% of the population. This discovery is also known as the 80/20 rule or the Law of the Vital Few. The Pareto Principle is a phenomenon that finds application in many places, such as software engineering, quality, manufacturing, word-of-mouth marketing, human resources, and government; the 80/20 rule was also popularized by the book The Mckinsey Way as a principle by which Mckinsey consultants follow to solve client problems.

A result of the Pareto Principle is the Pareto Chart. The Pareto Chart is used to graphically summarize and display the relative importance of the differences between groups of data, or to visually represent the Vital Few versus the Trivial Many.

To create a Pareto Chart in Excel, setup a spreadsheet such that the first column contains the categories of your data, the second columns, percentages of each category, and the third column cumulative percentages of each category. The example below represents data collected on the number of citations issued by police for various violations (Category) in a particular intersection. Overall, 300 tickets were issued for various traffic violations. The percentage of tickets issued for each violation and the cumulative percentage of tickets issued were calculated and entered into an Excel spreadsheet. If the data is not sorted from high to low, then sort the data from the highest percentage to the lowest. The sequence for sorting is Data, Sort, Percent, Descending. To apply the Pareto Principle more broadly, as a general rule, it’s important to remember that roughly 20% of our daily activities matter. Or, put another way, let us focus our energies and time on the 20% that will make an impact on the other 80%.