Pareto in the Wild: The Chinese Middle Class

We’ve long known that China and, in part, the rest of Asia, is no longer just a place for cheap production or a place to send back office or manufacturing operations. In fact, they are quickly moving from a country that excels in production to a country that is also active on consumption. This episode of Pareto in the Wild will look at the growing Chinese Middle Class statistics and demographics.


In 2008, China spent $4.3 Trillion, which represents about 1/3 of the total consumption in Asia. By 2030, the Asian Development Bank estimates that Asia as a whole will spend $32 Trillion which represents 43% or worldwide consumption. That’s a staggering estimate.

What is driving the consumption rate? Well, wages are increasing, standard of living is increasing, creating a massive increase in the Chinese Middle Class. 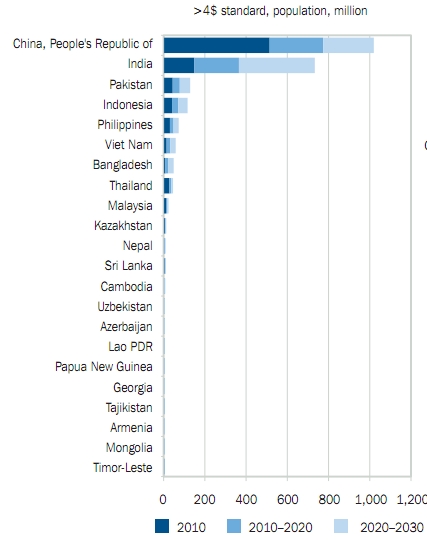 In the words of the Asian Development Bank,

Asia’s middle class” defined by ADB as earning $2 to $20 per person per day” is growing dramatically relative to other regions of the world. Some 56 percent of developing Asia’s population was considered middle class in 2008, compared to just 21 percent in 1990.

From the perspective of Pareto, you’ll see above that the growth of the middle class clearly separates the Asian countries from each other.

Implications of the massive middle class in China and elsewhere in Asia means that those consumption needs will open opportunities for new products and services aimed at the Asian market, which means that the current flow of products and current supply chain networks will need to be reconfigured. This is a big opportunity for all and a challenge as well. The logistical challenges alone, coupled with warehousing, fulfillment, and distribution opportunities abound.

Is the rest of the world going to be able to keep up with China’s growing consumption?

Other posts from the Pareto in the Wild Series:

In my daily living, I’ve attempted to document how and where Pareto happens to show up. Below are my posts that I’ve called Pareto in the Wild: