Why Leading and Being a Boss Are Not the Same Thing 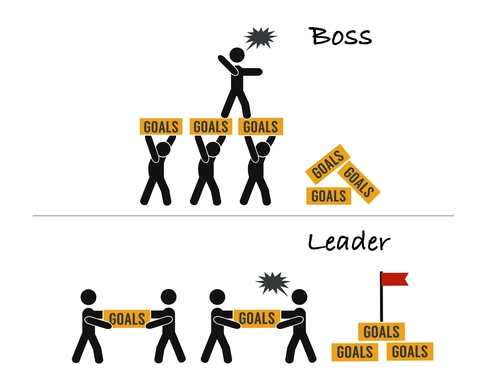 Why Leading and Being a Boss Are Not the Same Thing

You can tell a lot about someone’s character by the way they respond to the idea of being put in a position of leadership. Many people unfortunately immediately turn their attention to the material side of things, focusing on how prestigious the position would be, and how much more they would be able to earn in it. And of course, the prospect of ruling over others is quite attractive in itself.

But these are the wrong people for the job of a leader. A true leader must be effective at pulling the company forward, rather than idly giving orders from the back and blaming others when things start falling apart. There’s a reason it takes so much effort to climb up to that position in the first place it comes with some serious responsibilities attached.

The Behavior of a True Leader

There are many aspects of leadership that are important to focus on if you want to make a good impression. Taking responsibility for mistakes is a big one. A red flag to be on the lookout for are bosses who’re constantly looking for an opportunity to blame someone else for their mistakes, and can never take any blame themselves. There are lots of those around, and you might have had to deal with someone like that in the past too.

A leader must also be able to pull their own weight. Leading a company is not just about pointing your finger at people and telling them what to do. You have to put in as much work as everyone else, sometimes even much more. And at the end of the day, be prepared to not get any recognition for that. If things are going well, it often looks like you’re not doing much.

Another big point is how well you’re able to consider other people’s concerns. This includes both your employees as well as those on your own level. Different people have different ways of expressing their issues with any given situation, and you’re going to have to learn their habits. There’s no way around that if you want to be able to resolve conflicts efficiently in the future.

You must also ensure that there’s a solid system in place for providing feedback, and evaluating it on your end. Many people will want to express what’s on their minds once you open the floodgates, and you’ll need a good way of ensuring that you don’t miss any important details in all the noise.

Expanding the Company in the Right Direction

Growing a company isn’t as simple as just producing more, selling more, hiring more, and so on. You need to have a directed, focused approach if you want things to run smoothly. There is no room for compromise when it comes to choosing an appropriate business development direction. Sadly, it’s not rare that we see business owners going about this pretty much randomly, not paying any attention to where their company is going.

And before you know it, you’re expanding into markets that you have no clue about, dealing with issues that you’re not equipped to solve at all, and generally having a hard time managing your company. And this happens to many people, mostly because they fail to make a good initial plan.

Knowing When to Step Down

A good leader must also know when it’s time to quit. That time will come sooner or later, and leaving your position doesn’t have to be a negative event. It can come with a promotion to a much more responsible role or even retirement. But the point is, you have to know when the situation calls for a change in leadership. If you get to that point, you should exit gracefully and without burning any bridges with the new administration.

If you’ve played your cards right though, your contribution to the company will be remembered. People tend to look back fondly on people they’ve worked with well, and they tend to pay special attention to superiors that have shown to be better than the average boss on the market. Make it a point to make this kind of good impression, and it will benefit you a lot in the future.