Dyslexia Symptoms and Treatment are various and many. We know that when there is no standard, there is no Kaizen. We often think of this statement as referring to just processes. But, standards apply to a broad range of categories – even to the language, the means by which we communicate. More specific, the English alphabet – or the 26 letters in the Western Script – is a standard, but little if anything at all, has been done to improve it. Until now.

If you think about it, there are many characters in the English language that are very easy to mistake. For example,

Since the English alphabet makes it easy to make mistakes, a countermeasure to error-proof the English language by making slight improvements to the western script. In the context of lean, we call this approach Poka-Yoke.

Dyslexie Typeface was developed at the University of Twente by Christian Boer of Studiostudio. What they’ve done is simple but ingenious: they have exaggerated the differences between characters to make them easier to recognize. For example,

Lengthen the ascender or descender of letters:

Emphasize the differences in the letters: 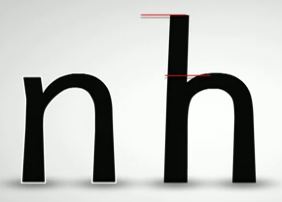 Make the openings in the letters exaggerated to make them easier to recognize:

What Christian Boer has done is nothing short of a Kaizen – he, with his team – literally improved an age-old standard and made it work for people with Dyslexia. By applying the principle of Poka-Yoke, he and his team developed a typeface that will allow people with Dyslexia to read better, comprehend better, and better manage Dyslexia.